According to Ray Wang, the founder of Constellation Research – customer loyalty is dead. We are now living in an ‘attention economy’, which means that if you’re not capturing the consumer’s attention or saving them time, they’re just not interested.

Ray was just one of the speakers at this year’s SAP Hybris Live event in Barcelona, as well as one of many people to mention the ‘L’ word. The subject of loyalty came up a lot, along with the many other ways digital technology is transforming the consumer landscape.

Here’s a little more on the topic, along with the rest of the biggest talking points and trends from the conference.

It’s all about the experience

Before we get onto loyalty, it’s important to think about what defines the modern consumer, and what it is they want. Carsten Thoma, the President of SAP Hybris, put this into context by comparing today’s fashion consumer with that of around 20 years ago.

He mentioned how consumers used to have to wait months for catwalk trends to trickle down into stores. Now, people are now blogging and tweeting directly from the runway, turning real-time moments into digital content. At the same time, brands are turning catwalk shows into products as soon as possible, bypassing the traditional structure of the fashion retail calendar.

This is great from a consumer perspective, allowing shoppers to get their hands on clothes as soon as possible. But while the ‘I want it all, I want it now’ millennial stereotype sounds somewhat brattish, it fails to highlight the perhaps more pertinent millennial desire – that of experiences over material possessions or products.

Interestingly, there has been a reported 50% decline in young people getting their drivers licence in the US over the past few years. Why is this the case? Well, alongside the aforementioned lack of desire for ‘things’ (especially products as status symbols), the rise of the sharing economy has taken away the need.

Companies like Uber (controversies aside) have demonstrated how delivering a seamless experience can entirely disrupt traditional industries. In other words, millennials simply do not care about buying a car if there is an even more convenient way they can get from A to B.

If you get hit by the amount of information and technology that is available to us today, you have got to make space somewhere else. This is what millennials are doing. And guess what? This change in behaviour is the most fundamental change in how you can sell to them.

Winning in an attention economy

But have companies like Uber and Amazon created an impossibly high set of expectations? For brands trying to compete, this is undoubtedly true. Today’s consumers are now so used to a certain type of brand that, like Ray Wang said, if they don’t get the service they expect they will go elsewhere.

So, how can brands generate loyalty in a “post-sale, on-demand, attention economy”? One answer is mass-personalisation. By understanding the context of the consumer – e.g. factors like their identity, location, and sentiment – brands can reach out in a more relevant way. Second is the ability to give choices, which is increasingly important in a digital world.

“Every choice is a demand signal”, according to Ray, which means it’s not about predicting what the customer might do in that moment, but anticipating what they will also want in the future (before they even recognise it themselves).

If you’re not delivering mass-personalisation, you’re irrelevant, you’re noise, you’re junk mail. Brands have less than a second to capture consumers’ attention with something contextually relevant.

Alongside personalisation, the general consensus at SAP Hybris Summit was that both attention and loyalty do not just come from one-off experiences, but a relationship that’s built over time based on ‘magical moments’ along the customer journey.

For example, it’s not good enough to deliver as quickly as Amazon. To win, brands need to match its service at every touchpoint, including checkout, brand communication, logistics, and post-sale recommendations.

When your Razer mouse breaks and @amazon comes in clutch with same-day delivery! pic.twitter.com/F4cW2Ddhel

The world as a computer

Another of the most interesting talks at this year’s event was delivered by futurist and researcher Sophie Hackford. She spoke about how digital technology will shape the consumer landscape of tomorrow.

Sophie believes that “we’re no longer connected, but moving into an age of entanglement” – which essentially means that we will have to navigate the world as a computer, and it is up to us (as both brands and consumers) to decide what we what to do with it.

Data is undoubtedly the biggest opportunity; however, it seems that new information isn’t only coming from the world around us, but also from space. So-called ‘astro-preneurs’ are creating satellites and sensors to generate a high resolution of earth, which they can then sell on as data to companies of all kinds, ranging from human rights groups to retailers and tech companies.

Why? These companies want visibility of all human and all physical phenomena going on on this planet.

But how is this relevant in the context of brands and consumers?

Let’s take the recent example of the Amazon and Whole Foods deal, and how the former brand might establish how much the acquisition should be worth. One way would be to use a company like Orbital Insight, which generates data from satellites. It sounds somewhat crude, but by watching how many cars are going in and out of Whole Foods car parks, a prediction can be made about the brand’s sales forecast – as well as its competitors. While this is just a hypothetical example, some companies have already started to unlock the potential of satellite data. Take Uber, for instance, which works with DigitalGlobe to help identify and improve pick-up and drop-off locations via satellite imagery. In future, the autonomous vehicle will undoubtedly use this type of technology to navigate cities. Meanwhile, roofing companies can now give you estimates and energy companies can tell you how much solar potential you have, without ever needing to visit your home.

Altogether, this highlights the extent to which brands will be able to access consumer insight in future. Privacy concerns aside, it undoubtedly means that those aforementioned consumer expectations will also continue to skyrocket. 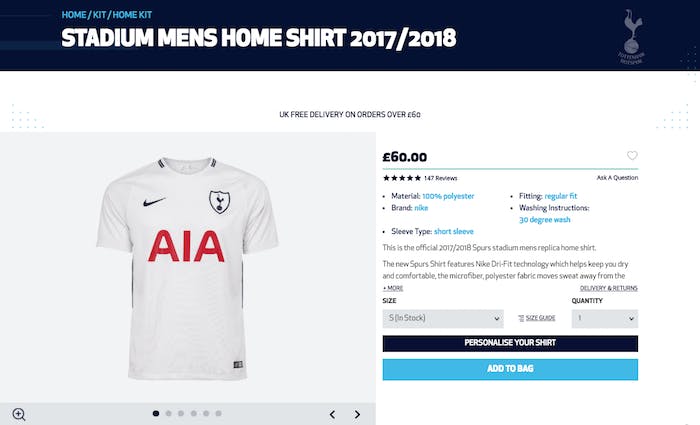 As part of the campaign, Spurs contacted fans via Instagram and recruited them to model the new season’s clothing. The aim is to celebrate the club’s fans, who are the ‘all-important twelfth member of the team’.