As ever, the 294-slide deck encapsulates the most pressing and hotly-debated topics in the industry, from data and personalisation to on-demand work, retail innovation, and China’s continued status as a world leader in internet markets.

In particular, the report’s section on ecommerce paints a fascinating picture of the trends that are likely to define the future of online retail: social media, personalisation, and subscriptions.

Social media and online shopping have always seemed like a natural partnership. What better idea than to combine the platforms where people spend huge amounts of time expressing themselves, browsing images and trading recommendations with the opportunity to buy things?

With that said, social commerce hasn’t been an overnight success. ‘Buy’ buttons on social media saw a lot of initial hype, but were slow to catch on, while dedicated social shopping platforms have remained a niche phenomenon.

However, Meeker’s 2018 Internet Trends report shows that social commerce might finally be getting somewhere, particularly with the 18-34 age group. Rather than making direct purchases through social platforms, people are discovering products on social networks in record numbers – and often going on to buy them.

In a survey of 1,000 US consumers, 78% of 18-34-year-olds said they had discovered products on Facebook within the last three months that they were interested in buying. Fifty-nine percent also reported discovering products on Instagram and Pinterest, demonstrating the power of visual social media for retail discovery. 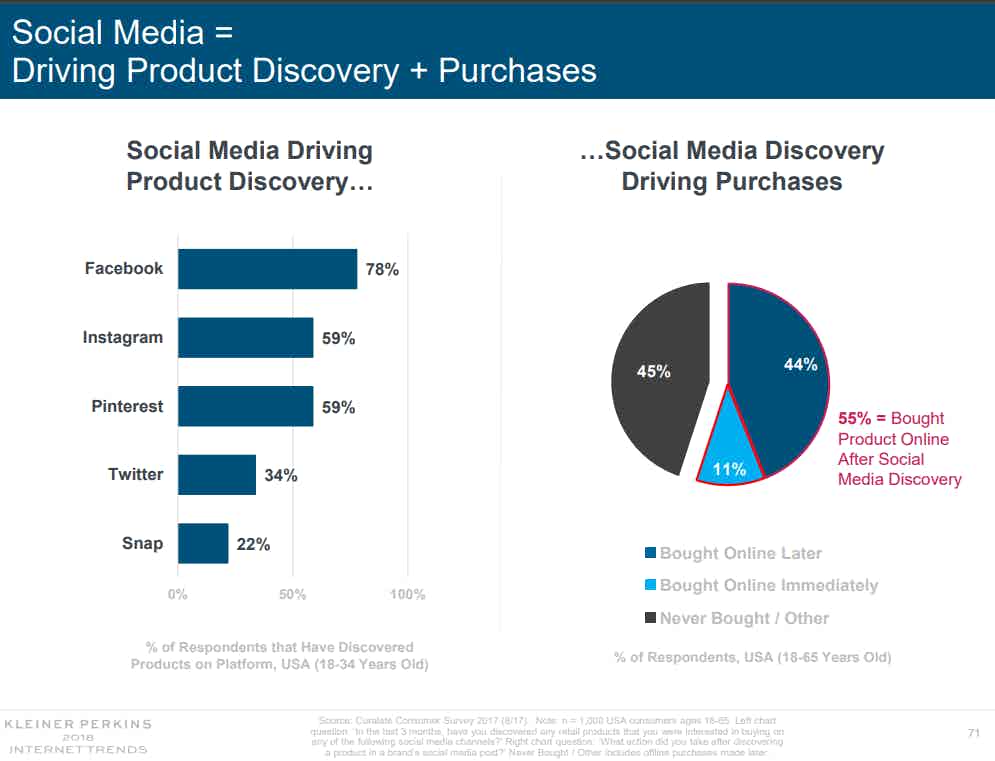 Even more impressively, 55% of respondents across all age groups (aged between 18 and 65) reported buying a product online after discovering it on social media – with 44% buying immediately, and 11% reporting that they bought the product later.

Meeker also noted that the share of referrals from social feeds to ecommerce sites is on the rise. According to data gathered by Adobe, the percentage of ecommerce referrals coming from social networks has risen four percentage points in three years, from 2% in Q1 2015 to 6% in Q1 2018. 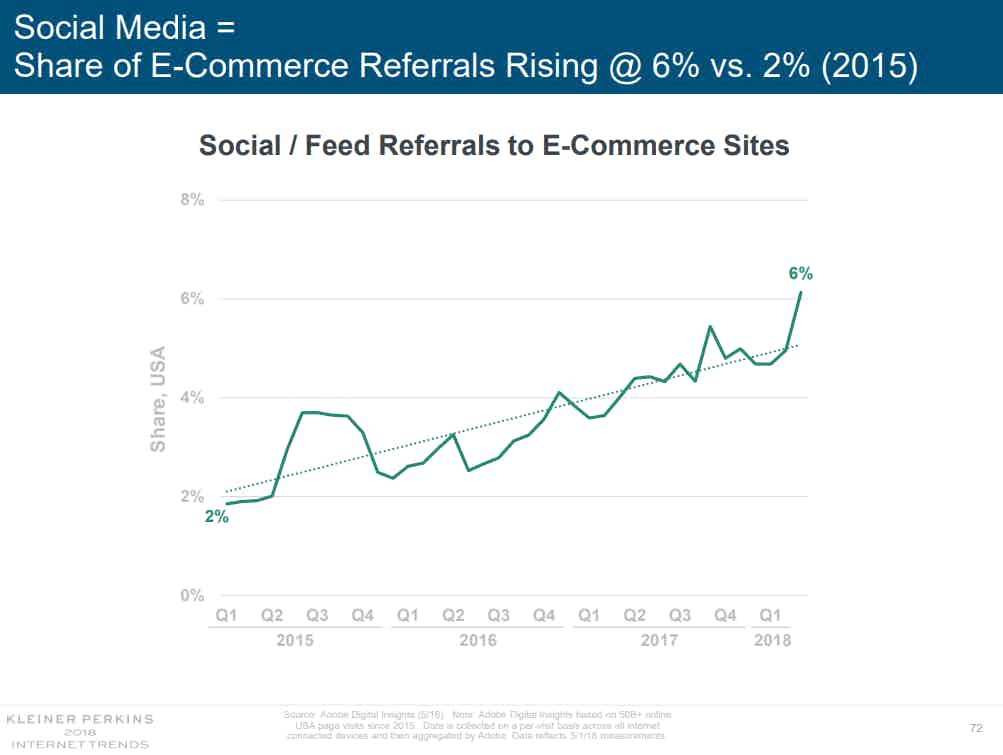 While these might seem like small numbers, they can still translate into significant revenue for retailers, particularly if consumers are clicking through from social media with a high intent to purchase.

What could be behind this growth in ecommerce referrals on social media? Meeker’s report hints at a couple of possible causes.

This personalisation then helps to generate ecommerce sales by making product ads more relevant and likely to catch the user’s attention. I’ll explore in more depth how data gathering and personalisation are driving the future of ecommerce a little later on. 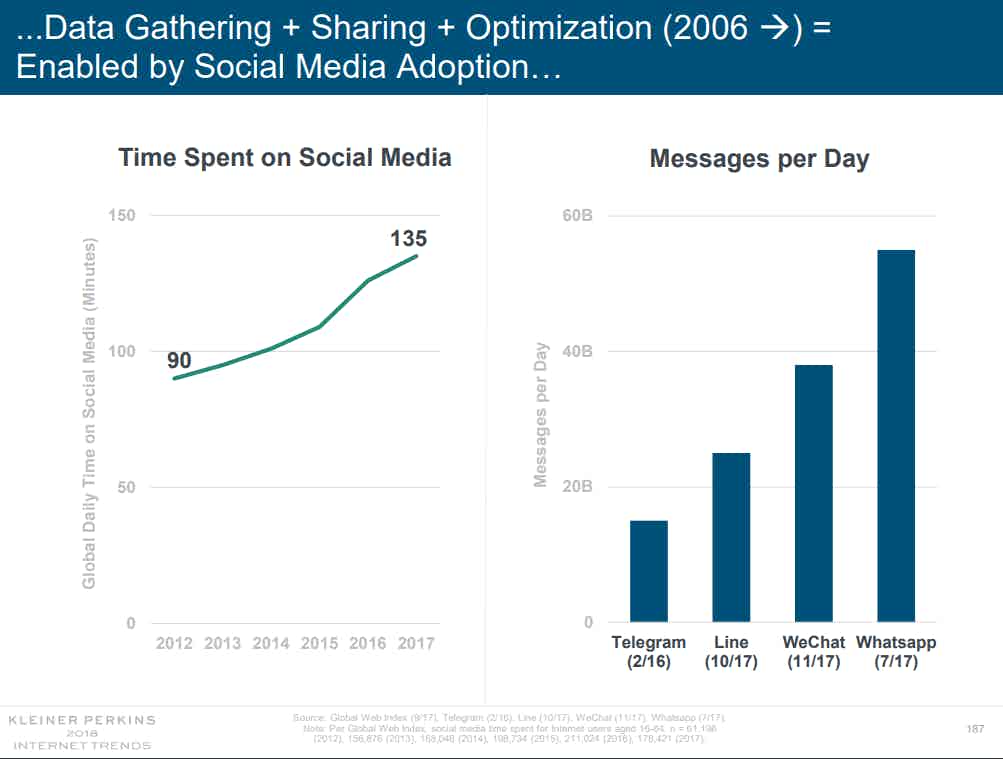 A couple of other social commerce trends worth noting from Meeker’s report: as we’ve seen, Facebook is the undisputed king of ecommerce product discovery, so it comes as no surprise that Facebook ad click-throughs to ecommerce sites are also on the rise.

According to benchmarking data from Nanigans, Facebook ecommerce click-through rates have risen from 1% in Q1 of 2016 to 3% in Q1 of 2018. Again, small numbers, but growing.

However, when it comes to the return on Facebook ad spend, cost is rising much faster than reach, which creates a problem for ecommerce brands wanting to cash in on Facebook. In the past year alone, eCPM (effective cost per mille, or the effective cost per thousand ad impressions) on Facebook has risen by 112%, while CTR (click-through rate) has only grown by 61%. 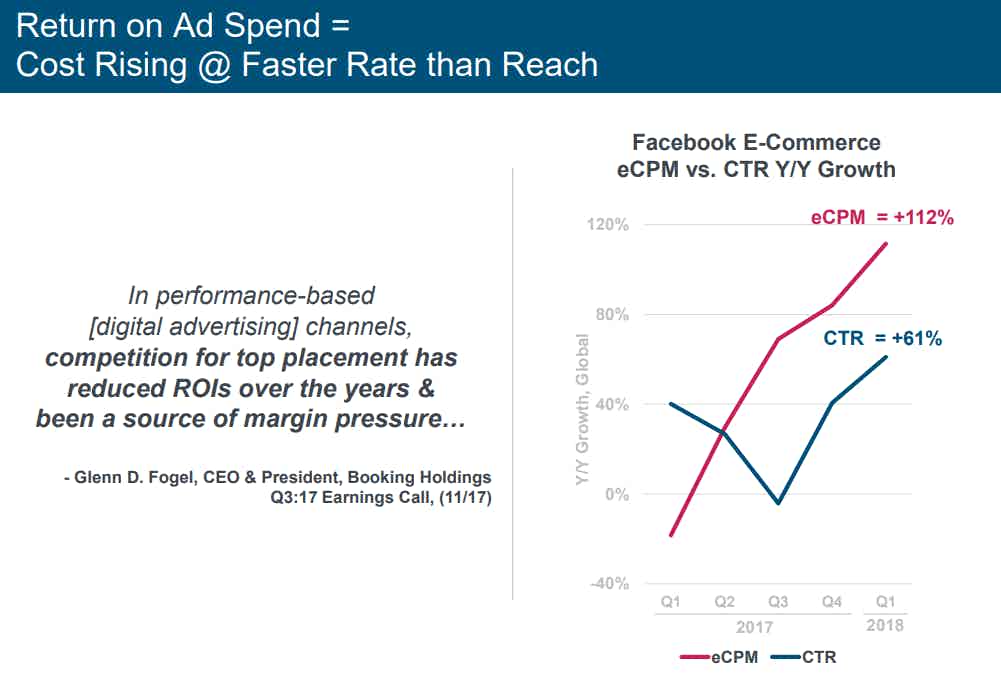 China’s latest ecommerce phenomenon might also have found a way to incentivise online shopping using socialisation. Pinduoduo is an app which allows shoppers to share products across social networks, and form groups with friends to qualify for discounts – sort of like Groupon meets social media.

Pinduoduo was recently valued at $15 billion in a new round of funding, and has more than 300 million users, closing in on Chinese ecommerce giants JD.com and Taobao. One to watch – and a possible success story for social commerce if it can keep this up. 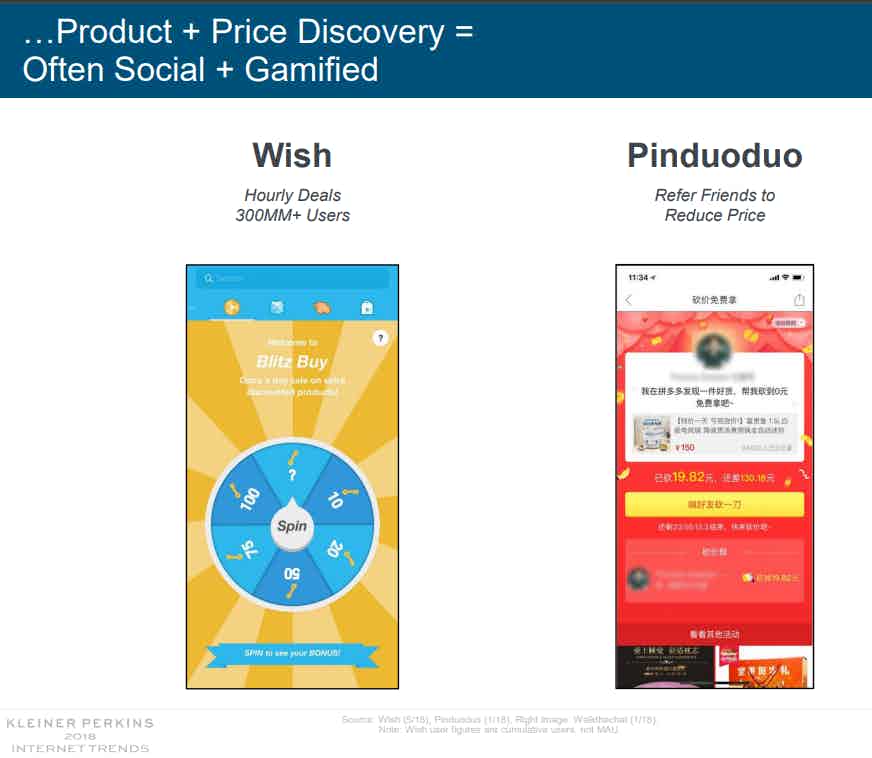 Personalisation and recommendations: The engine of ecommerce

Then with the advent of the web, commerce became driven by utility (with transactional ecommerce websites like Amazon and eBay dominating). This continued for two decades, until the 2010s, when data began to take over as the driving trend.

The hallmarks of data-driven ecommerce are personalised ecommerce offering curated product discovery and 24/7 recommendations – Meeker cites Amazon as an example of this (again – showing its ability to move with the times), along with Facebook, and Stitch Fix, a personalised styling service. 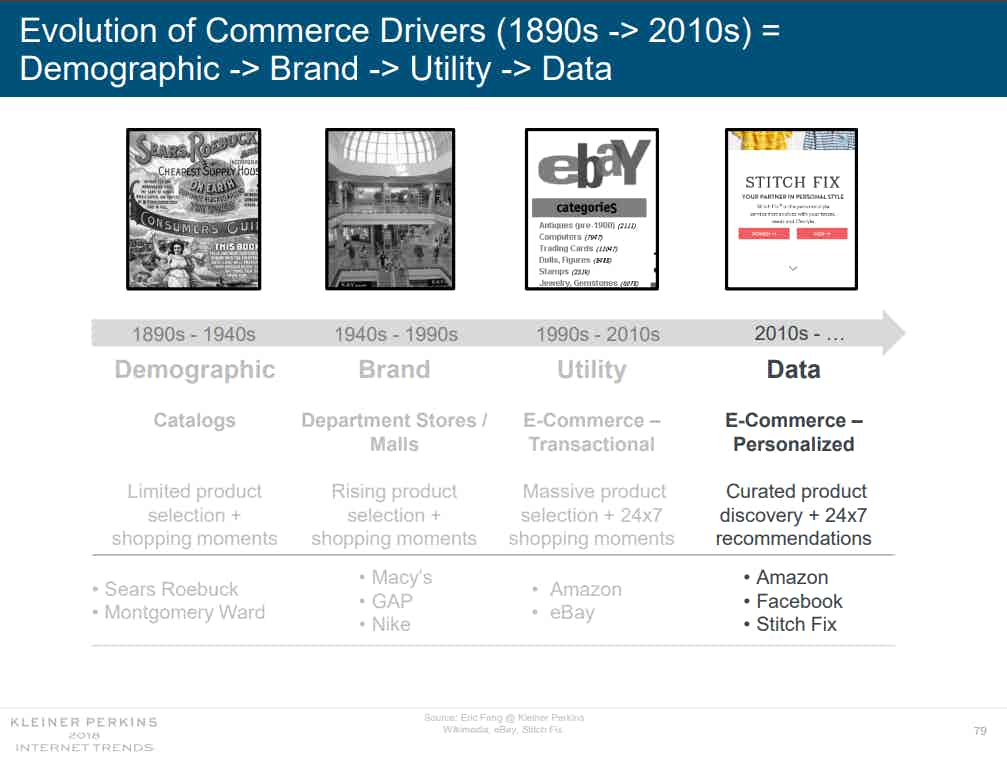 Personalisation relies on data gathering to be effective, which can make it a little bit of a double-edged sword, as users have to be willing to invest time into sharing their data with a business, and then trust that business to handle their data responsibly.

However, when carried out effectively, the use of data has a positive correlation with customer satisfaction, as revealed by this slide from Meeker’s report, which shows the American Customer Satisfaction Index (ASCI) scores of five US “internet data leaders”: 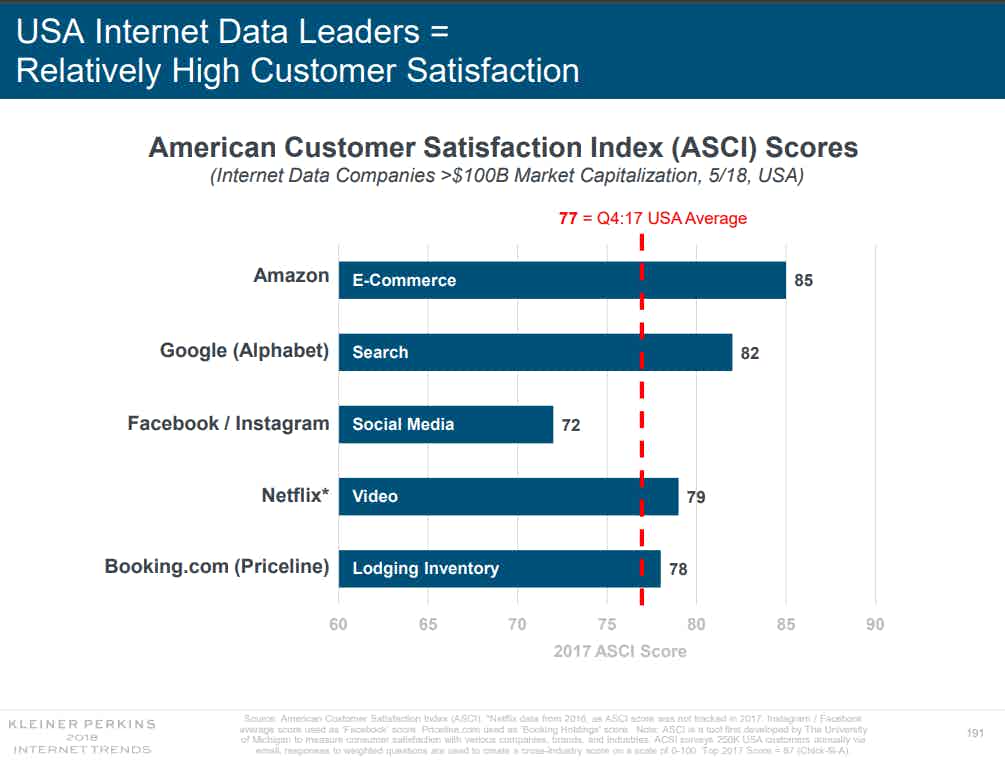 Four out of five of the leading companies for data usage and personalisation have an above-average ASCI score, with Amazon, the titan of data-driven ecommerce recommendations, scoring a whopping 85.

Only Facebook (and Facebook-owned Instagram, whose score is averaged with Facebook’s) falls below the average. These figures date to before the Cambridge Analytica scandal hit the news, but likely still reflect a lack of trust from consumers in the way that Facebook collects and handles data.

Given how heavily personalisation relies on data collection, it will be interesting to see how this trend will be impacted by customers opting to take more control of their data and, in many cases, opting out of data collection, in the wake of GDPR.

The evolution of subscription services

Personalisation is also one of the main driving factors behind the growth of subscription services. Meeker describes product purchases as “evolving” from buying to subscribing, and indeed, there’s plenty of evidence to suggest that subscription services are the future of ecommerce – or at least, a big part of it.

Meeker lists five key traits to which she attributes the phenomenal growth of subscription services in the current decade: access, selection, price, experience, and personalisation.

In particular, she believes that a strong user experience is vital to converting customers from the free version of a service to fully paid-up subscribers – a model used by many online subscription services. Meeker cites Spotify as a successful example of this: its percentage of monthly active users who are paid subscribers has risen from 0% in 2008 (when Spotify first launched) to 45% in 2017. 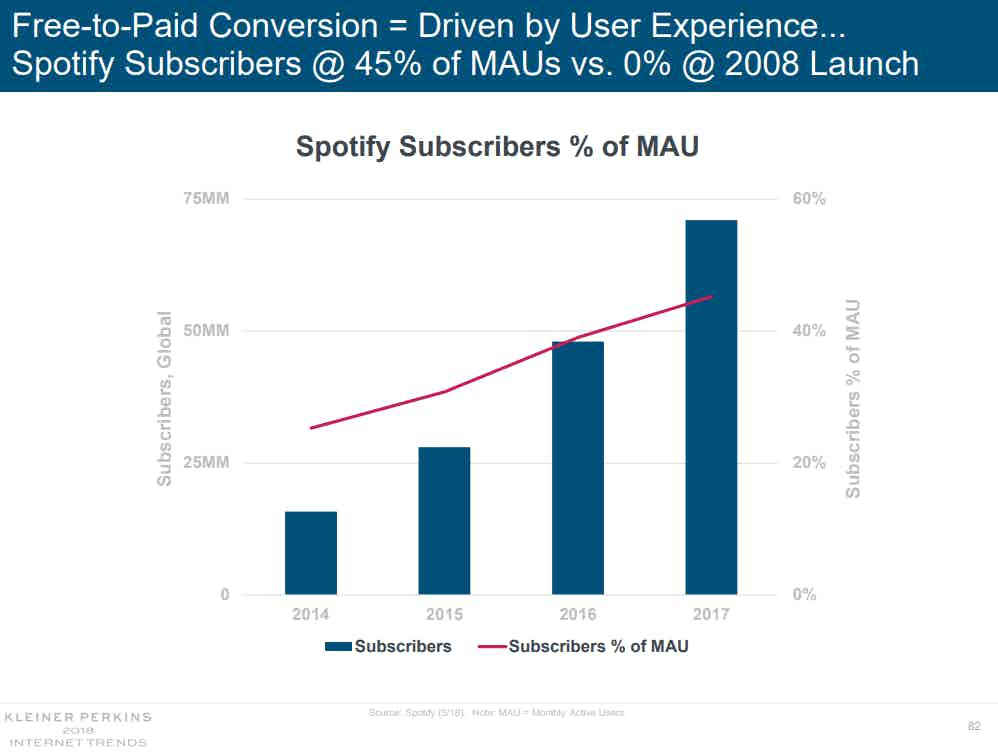 In other words, even if a company makes its service available for free, if the user experience of the paid version is compelling enough, consumers will be more than willing to invest.

Spotify is also a case study in the effective use of personalisation. Meeker uses Spotify’s personalisation features to illustrate how customisation and effectively-used data collection can boost customer satisfaction and engagement.

Meeker ties Spotify’s user preferences, which allow users to add whatever songs they like to a “Your Music” section and curate them into playlists, to a rise in daily engagement with the app, which has gone up from 37% of monthly active users (MAU) in 2014 to 44% of MAU in 2017.

In addition, Meeker illustrates how Spotify’s data-driven “New Releases For You” section, which presents new music releases based on the user’s musical tastes, has led to a rise in unique artist listening, increasing from 68 monthly unique artists listened to per user in 2014 to 112 in 2017. 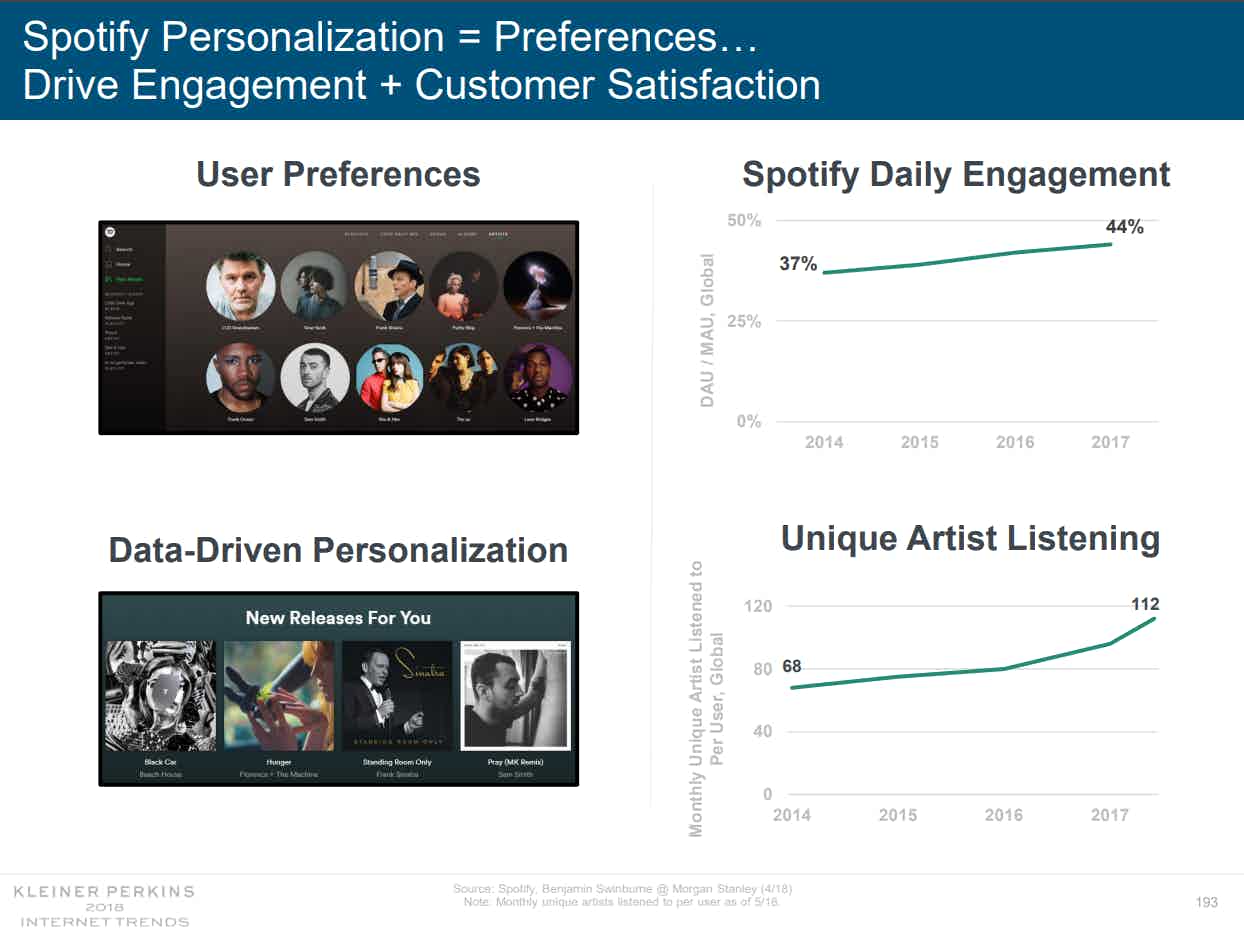 The double-edged sword of data

Looking back over the ecommerce trends that Meeker has highlighted in her report, it seems clear that personalisation is a unifying factor behind all of them – as well as being a dominant trend in and of itself.

But personalisation, at least when at its most effective, relies on data collection – which, as Meeker says in the report’s dedicated section on data gathering and optimisation, creates “multi-faceted challenges”.

According to a survey of US consumers conducted by Deloitte, the vast majority of consumers (79%) are willing to share customer data for “clear personal benefit”, but will protect their data when the benefits are not clear.

The actions that consumers are willing to take to address data privacy concerns range from deleting or avoiding certain apps (carried out by 64% of consumers), to disabling cookies (28%), through to outright refusing to buy a product (9%). 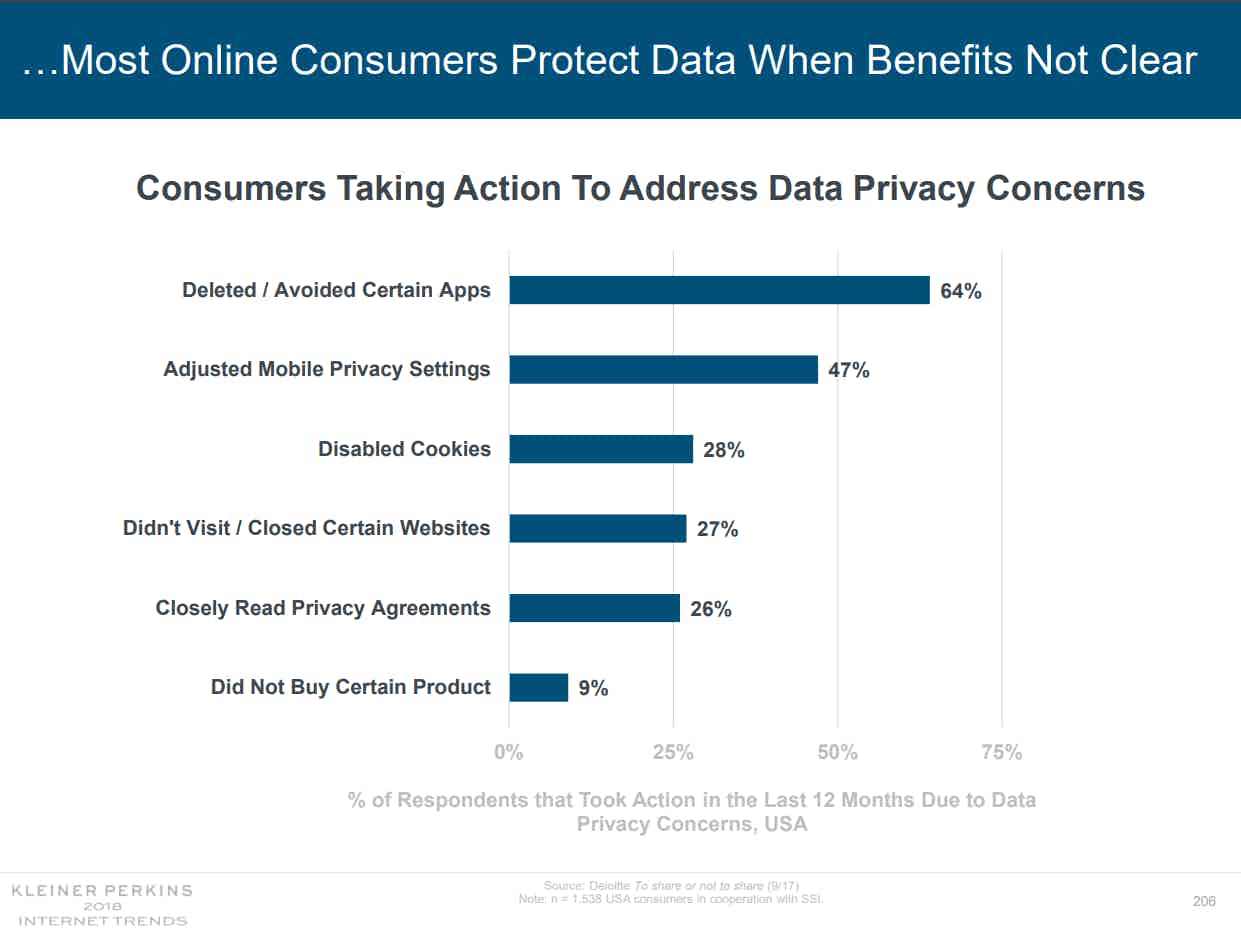 Internet companies, particularly giants like Facebook and Google, have responded by making privacy tools more user-friendly and accessible – driven in part by public pressure, part by regulation, and part by the need to gain (or regain) consumer trust. 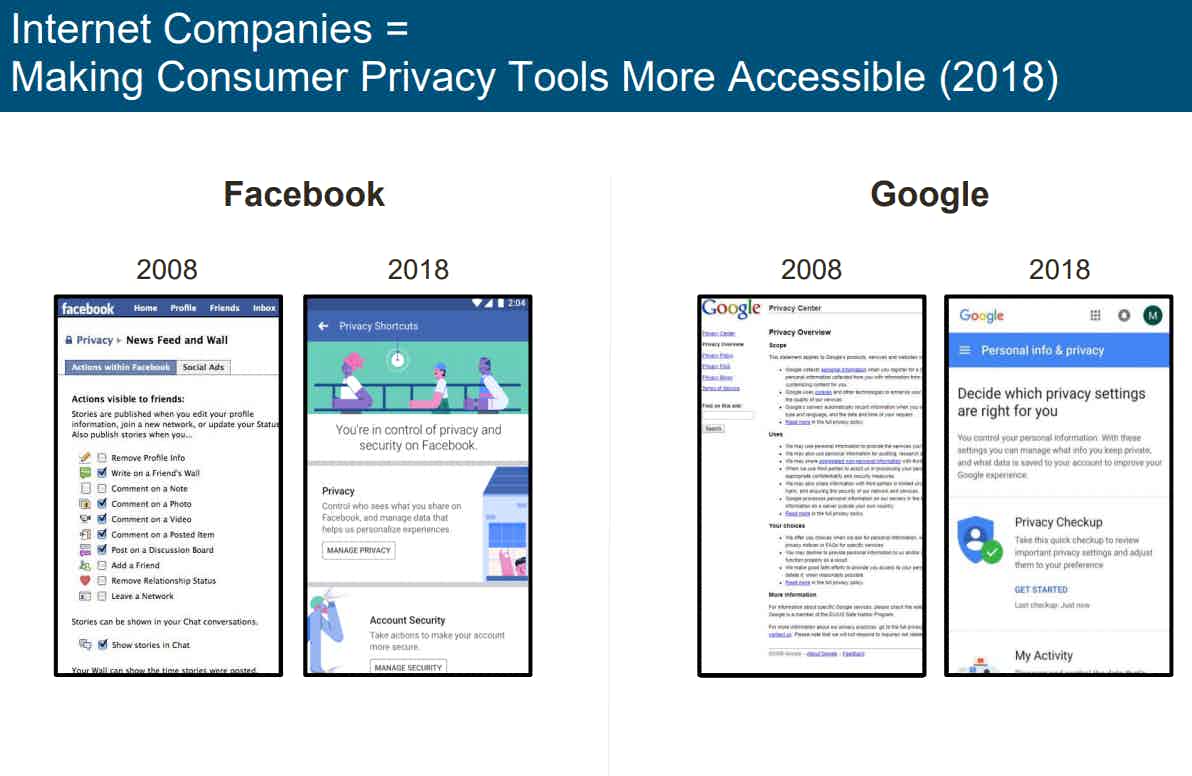 With data handling and collection set to be integral to the future of ecommerce, online retailers will also need to keep on top of this going forward if they want to stay competitive.

Here in the UK, we’ve been enjoying a bout of unusually good weather in the normally-dreary months of April and May.

And when good weather strikes, we all rush to unearth our summer clothing from the depths of drawers and wardrobes – or rush out to the shops to buy new gear. 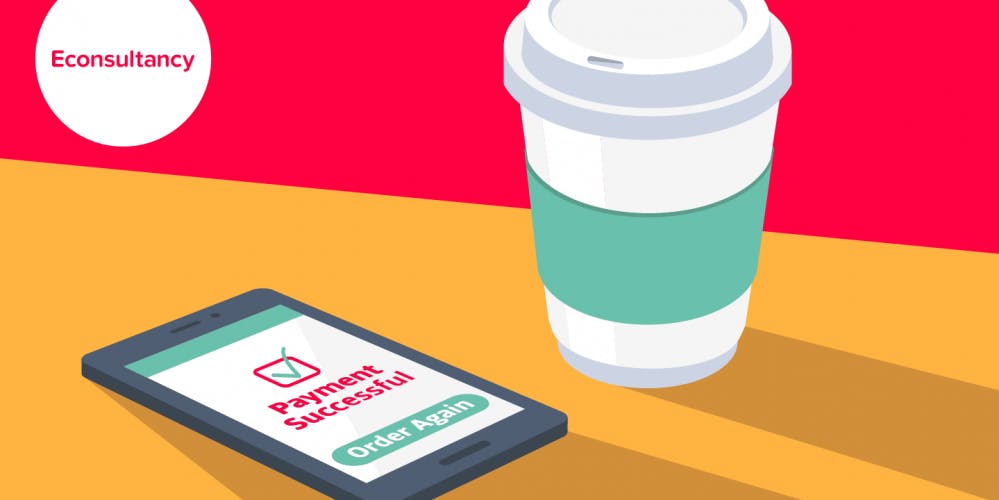