How much truth is there that negative SEO exists or is being used?

It’s actually pretty scary at the moment – as there is truth in negative SEO working effectively, see posts like this one from Aaron Wall. Of course Google are looking to favour brands in its search results – and big brands will be more protected by this due to the fact that they have authority and more natural back link profiles.

This means that negative links wouldn’t stand out as much percentage wise and the strong domain should be enough to protect it from any potential influx of negative links. It’s definitely the smaller and less authoritative sites which are at more risk from this.

Is it really possible to negatively impact another site’s search rankings?

It is potentially possible…but it is extremely rare. I was chatting to one of the Google Quality team who reckoned they’d only ever seen a couple of cases ever that fell into this category, and they look at thousands of websites a month.

Yes, it is, and the SEO industry chatter on this topic is at its highest level in years.  Google has rolled out the Penguin algorithm update on April 24, 2012 which is supposed to target websites that use spammy sources of links.  However, the SEO community is in agreement that this update has increased the danger of negative SEO tremendously.  Basically, a competitor would be able to engage in tactics that the Penguin update deems spammy and hurt a company’s rankings.

Yes – I used to believe that the worst case scenario from a negative link would be that it would have no impact. But we’ve seen a few sites take drops recently and the most obvious explantation is due to negative links. Of course you’d like to think that the only way to get to the top of Google is to focus on yourself and building a brand – but you can’t be naïve to what is actually happening out there and you need to make sure that your site is well protected from any negative SEO activity.

You can do all sorts of under handed things in search. You can proactively go out there and write a bunch of negative reviews and spam the search engines. That’s the basic way to look at it. I’ve not seen any case law on it yet as it’s difficult to prove who’s doing it.

What kinds of techniques would you use to do this (not that we’re planning to)?

Obviously, we don’t want to encourage anyone from participation in those type of tactics. But for illustration purposes it is safe to say that generally speaking a unscrupulous competitor could engage in:

The issue at hand is that Google cannot distinguish if you are paying for these spam tactics or your competitor is on your behalf.  This is why the SEO community can’t stop talking about this risk.

Over the past month, we can see that there are a lot of Panda and Penguin related updates. Those posts go into detail about what not to do on-site and off-site. Take notes on what not to do off-site and perform it on the site you are targeting.

I also want to make it clear that I don’t perform any negative for any of my clients nor would I ever suggest to do so. This is simply one way of doing it.

Very blatant link spam or hacking sites so that they contain hidden text and links are two basic techniques. However there is a slight ironic twist to it that Google may not notice some of your negative SEO efforts and may potentially reward the website you are targeting for the links, so as much as you might harm a competitor you could equally benefit them.

The reason this topic has picked up steam recently comes from Google increasing their anti-spam efforts and Googles increased level of communication with webmasters via Google Webmaster Tools. So even if you don’t get a website directly penalised via negative SEO, simply causing Google Webmaster Tools to send a competitor an Unnatural Link Profile’ message for instance, will still waste a great deal of the competitor’s time and energy.

Obviously I wouldn’t recommend this – but I’m sure sites like Fiverr.com have done pretty well out of this update!

Do you know of any examples?

I would describe negative SEO as self defeating, a bit like MAD, if everyone engages in it everyone loses. My personal opinion is if everyone is simply focusing their time and effort on trying to destroy each other, it means no one is focused on making the web better for users.

I can’t name names, however, a client who has reached out to us to help his business with rankings was targeted by negative SEO. After our review, we found that he posted a very negative comment on rip-off report about his former SEO company that he wasn’t happy with.

Based on the timing, it appeared that this company then targeted his business.  His doggie boutique store website started receiving links with bestiality and sexually oriented material. Based on the extent of the negative SEO campaign and the business owner’s limited budget there wasn’t much that he could do to reverse the negative impact besides pleading with Google for a manual review. He ended up switching his domain and starting from scratch.

How do you know it’s happening to you and what do you do about it?

With advanced SEO tracking you can see where the trends start to occur.  A good SEO manager is already looking for negative SEO. They’ll keep an eye out for a spike of negative comment strings and back links going in from strange places. You need to look for terms that are starting to drop down and downward trends in words that aren’t normally turning downward.

What I would advise on the defensive side is to make sure you do a cleanup. This is quickly becoming a key part of an SEO project now, so if you spot unnatural links in your profile (whether you’ve built them or not) try to get them removed.

If you’re not in control of it, then send a Google reconsideration request, providing a report on the links you are in no control of and ask that they have no value towards rankings – this really should be part of Google Webmaster Tools and I’ve got a feeling it will be coming later this year. 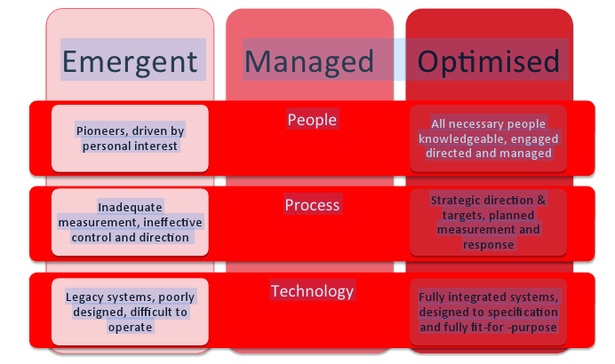 One question that we often get asked is ‘how can we develop world class digital capability?’ It often comes after companies have tried traditional methods that, when done in isolation, are doomed to failure.

A common tactic tried by many is to hire ‘digital gurus’ to come and magically fix their problems. They are then frequently isolated and over stretched so they often move on after six months due to frustration and a lack of understanding of their role.

Or, in today’s job market where digital skills are at a premium, they simply get a better package elsewhere.

On the flip side, some companies invest in training for their ‘traditional marketers’ without considering that there are organizational elements of the business that need to change as well.

Add to this a market that constantly evolves and the resistance to change most people have and you have a heady concoction of failure.