The retailer is Starbucks, an early entrant into the space, that, according to eMarketer, will have 23.4m people aged 14 years and older use its app to make a point-of-sale purchase at least once every six months. 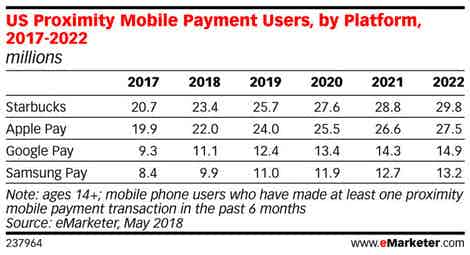 Here’s a look at the reasons why Starbucks has been so successful with mobile payments.

There’s a compelling use case based on high frequency

Starbucks is a frequent stop for millions upon millions of individuals. Some of the company’s customers even visit daily. Because so many people visit Starbucks on a regular basis, there are lots of people who have a good reason to install and use the app.

While acceptance of the Three Pays is growing, acceptance is not ubiquitous and that presents a usage challenge. The friction associated with credit and debit card payments is decreasing and thus, standalone mobile payments services that aren’t universally accepted are arguably decreasingly appealing.

The app allows for mobile ordering

Unlike the Three Pays, the Starbucks app isn’t just about payments. Notably, Starbucks customers can place orders – and pay for them of course – through the app. This gives them the ability to order ahead and avoid lines, which in and of itself is a compelling value proposition.

Perhaps the most compelling reason the Starbucks app is beating out dedicated mobile payment apps is that to earn rewards under the company’s Starbucks Rewards loyalty scheme, patrons must pay for their purchases through the Starbucks app.

What other retailers can learn from Starbucks

Perhaps encouraged by Starbucks’ success with mobile payments, other retailers like Target have launched mobile payments offerings of their own. While few if any will achieve Starbucks-like adoption, there is the potential for large retailers to drive adoption of such offerings among their most loyal customers.

To do this, however, they will need to look at the reasons Starbucks has succeeded, looking for both opportunity and shortcoming. For example, most retailers will not have a high frequency use case, but they could look to Starbucks’ savvy integration of its loyalty scheme into its app and use that as inspiration for their mobile payment offerings.