The voice revolution is upon us. The big tech companies are going head-to-head on voice technology, sales of voice-activated smart speakers are on the rise, and the future of search could be SERP-less.

At least, that’s what numerous think-pieces, blog posts, talks and pundits are saying about voice search – and have been saying for some time now. But does the evidence match up to the hype?

Terms like “answer engine optimisation” have entered our vocabulary, and marketers are eyeing up the bandwagons of Alexa Skills and Google Home Actions as ways to be present on these devices – all while trying to optimise their content for the surge of voice traffic which is certainly coming in the near future. Marketing guru Neil Patel released a video on voice search optimisation earlier this month which asserted that, “If you haven’t optimized your website for voice search, you’re already behind.”

But how many of you reading this article regularly use voice search? And I don’t mean voice commands, like “Set a timer for ten minutes” or “Alexa, play smooth jazz”. I mean actual informational queries that pull results from the web.

The conflation of voice commands with voice searches is fuelling a lot of the misplaced hype around voice search and the huge revolution in search it supposedly represents. Don’t get me wrong: voice interfaces are a big deal, and the immense consumer popularity of smart speakers definitely means something. I just don’t think it means what many search marketers think it means. 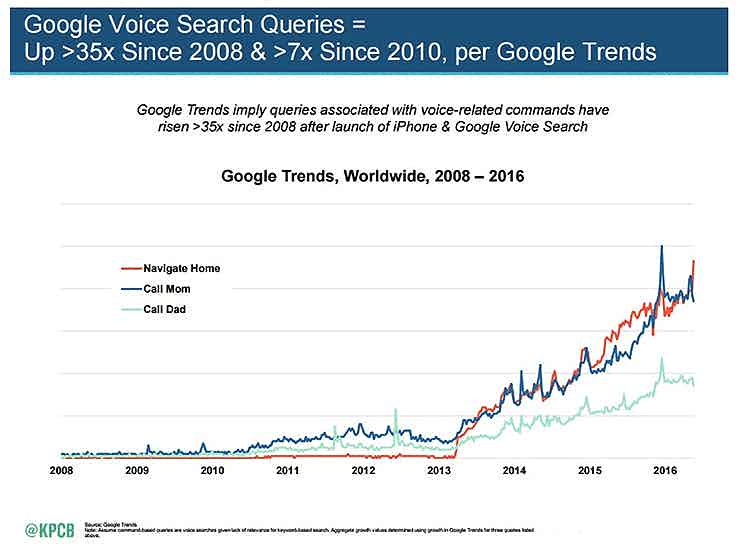 Even Mary Meeker is guilty of conflating voice commands with voice search. “Navigate home” and “Call mom” are not search queries, even if they do represent an interesting trend.

In this series, I’ll be taking an up-to-date look at the state of voice search, as distinct from voice commands: its adoption, its flaws, and its potential. What does it really mean for marketers, and should we be as excited – or as concerned – about the “voice revolution” as many experts are saying?

First up is mobile voice search. How widespread is it in 2018, how much do marketers stand to gain from optimising for it, and how can they go about doing so?

The state of voice on mobile

Before voice-controlled smart speakers burst onto the scene, mobile voice search was the talk of the industry.

Users would address questions to Siri, Cortana or Google Assistant on their smartphones, frequently making localised “near me” queries such as, “Show me a Thai restaurant near me”. Brands were advised to prepare for a rise in consumers making these “in the moment” searches, and it was predicted that the future of voice search would be mobile and hyper-local.

Unfortunately, Google hasn’t released any further statistics since 2016, which leads me to suspect that the use of voice search on mobile hasn’t grown as much as Google would like (if at all) in the two intervening years.

In fact, mobile voice search might actually be losing ground to smart speaker voice search: data collected by Verto Analytics indicates that usage of and engagement with Apple’s Siri declined between 2016 and 2017, while usage of Amazon’s Alexa has skyrocketed, with a 325% increase in monthly active users over the same period.

Assuming that this 20% has remained relatively static over the past two years (I’m using that as our “ballpark figure” for the purposes of rough calculation), allowing for some growth in adoption and perhaps some voice aficionados who have moved over to using smart speakers, is it a 20% worth optimising for? Let’s run some rough calculations.

Who is using mobile voice search, and who should optimise for it?

Volume-wise, if we estimate that 58% of all Google searches are carried out on mobile (based on research by Hitwise from 2016, though I’m sure the percentage has grown since then), of which 20% are voice commands or queries, and 20% of those are non-incremental… it works out to a very rough 81.2 million searches per day. Which is not nothing, but is only a fraction of the 3.5 billion daily searches of all kinds up for grabs.

Based on this data, I would suggest that optimising for voice search on mobile in 2018 is not as cataclysmically urgent as many industry commentators would have you believe – but could potentially give you an edge if you have the resources to optimise for it, if your business caters to a primarily mobile audience, and/or if you operate in a sector which is more likely to be on the receiving end of voice searches from consumers.

How can you work the last one out? Some excellent recent research from Stone Temple Consulting has shed light on the scenarios in which people use voice on their smartphones. Specifically, respondents to Stone Temple’s Mobile Voice Usage Trends 2018 research answered the question of why they might use voice commands (which would also include search) on their smartphone instead of typing. 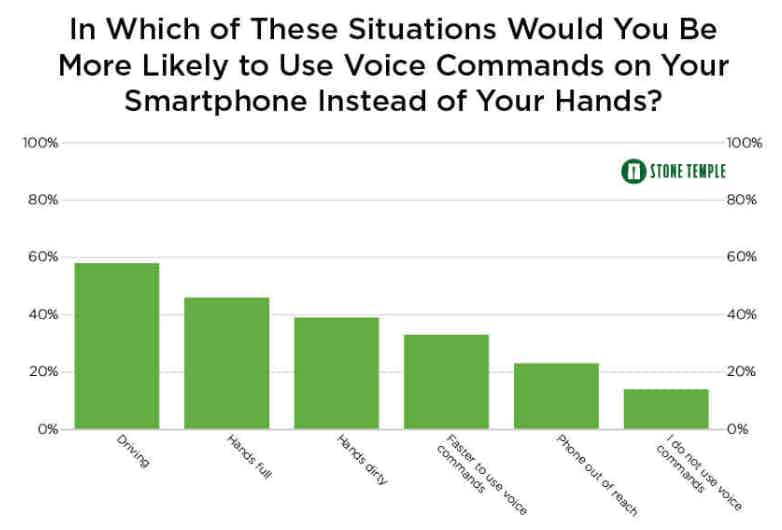 Based on this information, you can ask: is my business something that people are likely to look for information from while in any of these situations? Activities like gardening, DIY, cooking, and other manual tasks are all likely candidates for voice search – as are more messy and involved activities like taking care of animals or children.

Driving seems more like an activity for using voice commands than voice search (playing music, for example, or making a phone call) – but it’s quite easy to imagine a driver making a search for a local business, restaurant or petrol station while on the road.

Finally, we come to the how: if you’ve determined that your business would indeed benefit from optimising for voice search on mobile, what is the best way to go about it? Here are some tips to get you started.

Getting to grips with voice search

How to optimise for mobile voice search: best practice tips

Adding schema markup to your website helps Google identify the different elements of a page that might be relevant to a voice query, such as events, prices and opening hours. It’s also great for getting rich results like featured snippets, which can help you both rank for voice queries and also stand out on regular mobile and desktop search.

Read more here about the types of schema markup that work best for voice: An introduction to schema.org markup for voice

When people do use voice search, very often those searches are local. An April 2018 survey of 1,012 US consumers by Brightlocal found that 58% of them had used voice search on a smartphone to find local business information in the past 12 months, while 46% of voice search users looked for a local business on a daily basis.

Make sure your local SEO is up to scratch with citations in relevant business directories, a consistent NAP (Name, Address and Phone) across the web, and some positive customer reviews if you can get them.

Google’s Speed Update came into effect this month, so a fast mobile site is a must. Making sure your site’s mobile layout and navigation is intuitive will also prevent users from bouncing away or getting frustrated when they come to your site on mobile.

Get your point across concisely

In the next part of this series, I’ll be looking at the new voice search in town, smart speaker voice search: its adoption, how it differs from mobile, and what marketers can do to optimise for it.

This is part one of a series on the state of voice search in 2018. Read parts two, three and four: 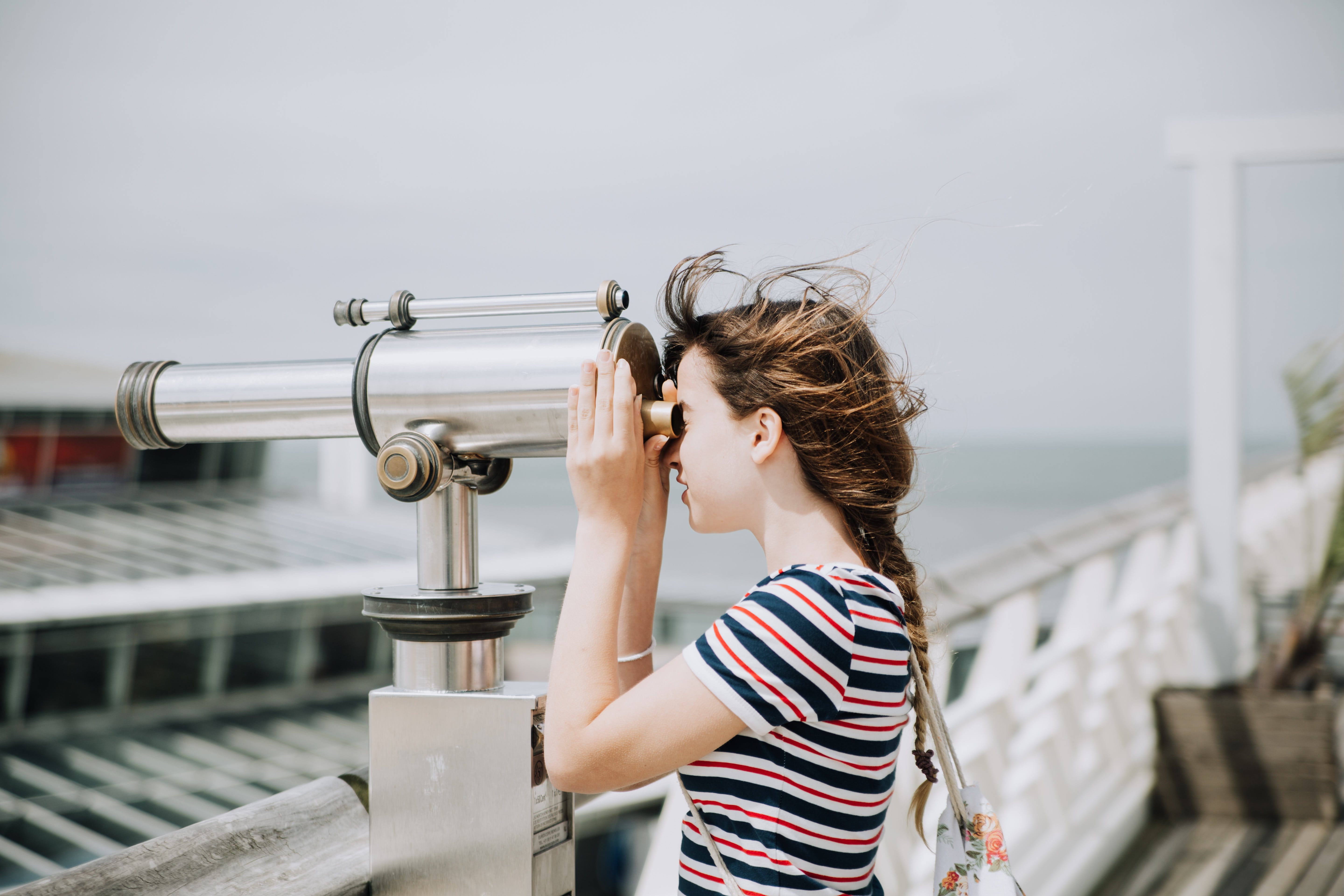 Whether it’s due to the impact of GDPR or a consequence of the move towards a voice-activated Internet, the word on the lips of leading digital marketers right now is intent.

What does the future hold for voice search? If you search the web for these words – or a version of them – you’ll encounter no shortage of grand predictions. 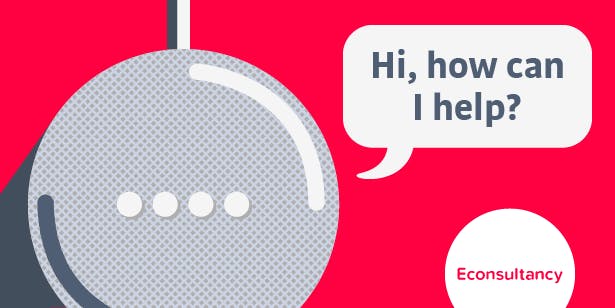 Welcome to the second part of our state of voice search in 2018 series.

In this series, we’re taking a realistic look at voice search in 2018, with no hype or hyperbole: establishing how widespread it really is, whether you need to optimise for it, and how you can go about doing so.