The brainchild of reality TV semi-celebrity Emily Weiss, it is a spin-off from her popular blog ‘IntoTheGloss.com’ (an editorial beauty site). Whilst Glossier’s trajectory from nowhere to darling of the cosmetics world has much to do with its sister site, the savvy CEO, and a tidal influencer strategy, it is in fact the fantastic customer journey – from online to on-skin – that keeps people coming back for more.

This is a brand that knows its audience, nowhere is this more evident than email newsletters, which are often playful and quizzical, yet equally compelling.

For example, on March 2016 a message was sent with the odd title “Re: Phase 2 Launch tomorrow”. Inside there was plain text, no images, and content – it appeared to be a professional exchange between the Head of Design and the Founder that had been mistakenly forwarded to customers.

“Hey guys!” the former proclaims, “The new product pages and fonts go live in the AM. Watch out world, there’s a new serif in town.” Weiss fires back: “This is huge, guys. TOMORROW!!!” The ‘Unsubscribe’ option at the bottom revealed that it was indeed a mail-out. Essentially an exercise in ‘guerilla emarketing’, it gave the recipient the feeling that they were peeking behind the curtain, with tantalising language that generated anticipation.

The brand has frequently returned to the theme of provocative subject lines, such as “ADULTS ONLY”, “whoops”, and “How to get Rich”. Sometimes the content is related – in the case of the latter it is about ‘rich moisturizer’ – whereas others are often more ambiguous. Another example from May 26 was titled “Are you leaving?”. Given the channel it had shades of an unsubscribe message, yet it was in fact about Glossier’s travel pouch (for carrying items on the plane). It is borderline clickbait – but it works.

Glossier has used GIFs; added instructional graphics to images; and even brought back an early 2000s favourite, downloadable ‘wallpapers’. What is remarkable is how the brand consistently finds new ways to excite its audience, belying the fact that the ecommerce store carries less than 30 products.

The inbox experience is extended unequivocally through to the website, which could act as a reference point in ecommerce. Although the templates that underpin the site are not revolutionary, the brand majors on strong imagery and equally compelling language, with quips such as “the best highlighter in the universe” expertly placed. A common theme with this brand is the sense that it knows its customer; this translates throughout the user experience (UX). For example, the arrow cursor has been replaced by a series of emoji-style icons that are different from one piece of content to the next, utterly pointless but equally glorious.

The product pages are impressive. Not only is the inventory shot luxuriously – often on models who are in fact employees – there is a full description, replete with awards won and application guidelines. Towards the bottom of the page images are used to further describe an item. For example, the highlight properties of ‘Haloscope’ make-up are cleverly presented by a simple motion: the wearer moves her hand from side to side, whereupon it shimmers in the light. Glossier can also claim to have been consistently aware about how its products might look on different skin tones. Those items with more than one shade usually have multiple application guides featuring models with varying skin or lip colours. Another clever initiative is the ability to either add a single piece into the shopping bag or essentially subscribe by selecting ‘Deliver every’ one, two, or three months. Glossier has been brave with reviews too: a sample of the best and worst are positioned next to each other at the top of the section – all remaining responses are listed thereafter. (A customer can even sort results by date or highest / lowest rating.)

The checkout is invitingly easy. Here too a neat touch, with a progress bar filling in front of the eyes to indicate how many more dollars are required to qualify for free shipping. Gamification of the purchase process is rarely a bad thing.

However, the best is saved for mobile. Glossier has not bothered with an app, but, recognising the proliferation of smartphone usage amongst its audience, has designed an excellent m-commerce site. In fact, it basically is an app. For example, simple navigation is anchored to the bottom of the page, rather than via hamburger menu. Product shots fit snuggly within an iPhone screen and automatically scroll, making life a little more convenient for the viewer. One slight error though might have been adding so many reviews to each page, forcing the user to scroll for quite some time before being shown related items.

The checkout is – like its desktop counterpart – brilliant. As a further help, a promo box is presented as a prominent overlay, making it easy to enter the code.

Whilst Glossier’s comms and user experience are no doubt fantastic, it would be all in vain if the product was a letdown. Yet in many ways this is the strongest suit and ensures an exquisite end-to-end journey.

First-off, the price-point is squarely in-line with the dominant player in the market, Sephora. For example, a $25 ‘Priming Moisturizer’ is comparable to anything on its competitor’s site. Glossier definitely sits in the enticing ‘affordable, not cheap’ zone, thereby giving it enough of an aspirational quality, without costing “half a paycheck”. Indeed, the Glossier sweater notwithstanding, no single item strays above the $40 mark.

The product packaging is almost flawless. The typography is bold and robust, and the standalone ‘G’ logo has an almost gothic quality. Juxtaposed are the simple yet bright colour blocks, which look like a pantone – this is demonstrated ably in the Cloud Paint. The company has managed to produce an inventory that is feminine without being ‘girly’. Crucially, it is easy to imagine the items standing out inside a bathroom cabinet. This is essentially an online business (the exception being a Manhattan showroom), so parcel presentation is important, especially given that shipping, whilst free over $30, is otherwise not cheap and certainly slower than buying at a local shop.

An order comes in a white box embossed with Glossier’s single-letter logo. Under the lid there is are quotes like “Skin First. Make up second. Smile always.”, all conveying a personal touch. The merchandise is encased within a pink semi-transparent sleeve with bubble wrap. (Perfect for carrying on a flight with most products below the TSA liquid limit.)

Inside might be stickers or notes, all to enhance the unboxing experience – again, a knowing nod to a distinctly millennial endeavor. Whilst sales and consumer feedback attest to the quality, should someone not like their purchase they can return it for free. However the brand urges you to give it someone else who might like it and still receive money back. Clearly, this is not altruistic, however it reaffirms a central pillar of thoughtfulness that runs across all customer touchpoints.

There is much more to admire about the brand, such as its social media presence and ethics, yet it is these three aspects that stand-out. The path from email to enamel is considered, engaging, simple, and rewarding.

And on July 12 Glossier announced that it will start to ship internationally. The formula is a winning one, so expect to see Glossier soon.

Shopify Plus is a relatively new release of popular SaaS ecommerce platform, Shopify, specifically designed to meet the needs of mid-level and enterprise-level online retailers. 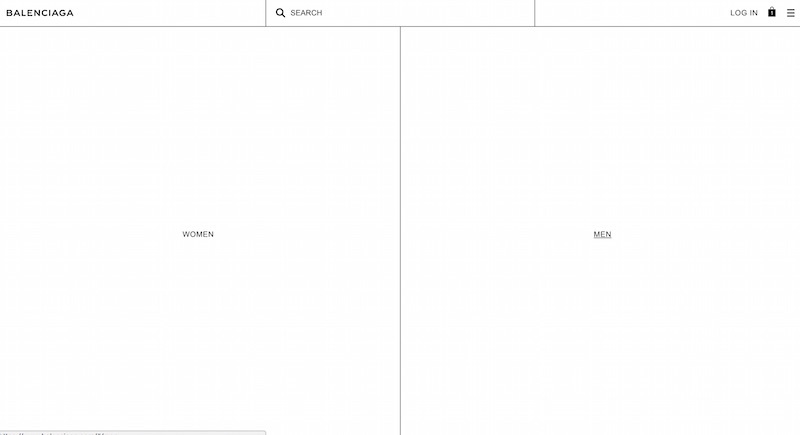 In March 2017 Balenciaga launched a new website which is pretty remarkable as far as web design goes.

You can see the homepage in the screenshot below. The rest of the website has the same utilitarian aesthetic and frankly looks as if the brand decided that the agency wireframes looked just fine as they were.