17% of website users visit regularly, but never purchase. Their regular viewing times of 9am to 11am and 1pm to 5pm suggest that they might be stay-at-home mums or non-working individuals with plenty of time on their hands to surf their day away.

They are twice as likely as your average site visitor to be surfing on an Apple device using the Safari browser and to be using a tablet. Geographically, these users tend to come from urban areas, although Londoners don’t seem to be as prone as others to this behaviour.

This core group of loyal website fans make up just 0.03% of total users but create 30% of revenue  Intensely loyal to their chosen retailer, they visit their preferred sites 300 times more often than the average user.

They’re 20% more likely than the average to be using a tablet, but are 10 times less likely to be visiting via a mobile. These users shop between 1pm and 3pm during the day, but will also spend up to 20 times longer than the average user surfing between midnight at 4am.

These users are 23% less likely than the average visitor to come from Central London but are over-represented in the city’s suburbs, in particular in Ealing, where more than twice the average number reside.

A strange retail breed, the basket case comes to a site and fills their shopping basket but never completes their purchase.

They only represent 2.46% of users, but generate no revenue for the retailer. They tend to use Google’s Chrome browser, which has a younger user base that’s happy to shop around, perhaps explaining their bizarre on-site behaviour.

These users come from the Midlands and North West, particularly from Birmingham, with 1.5 times the expected number of visitors coming from that area. They’re also largely nocturnal, with their web usage focused around 7.00pm-3.00am. 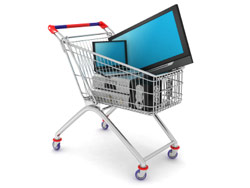 Making up 1.03% of users, the focused few generate 10% of total revenues, making them the second most valuable segment.

These users visit a site and make a purchase with no messing around and seemingly little consideration. Whilst Mancunians rarely display this behaviour, people from NE London seem to be keen on this sort of focused shopping.

They’re 18% more likely to be using a mobile than the average user, and tend to surf via Internet Explorer or Chrome.

How to increase conversion rates

The research findings show that by breaking down online shoppers into these different personas its easy to see where retailers should be focusing their efforts.

Sofa surfers and basket cases show all the traits of ‘real’ shoppers and if you’re not analysing your audience properly you’ll never know that they’re not giving you anything in return.

By understanding what people are doing on your site, and whether or not they’re going to turn into paying customers, you can make more informed decisions about where to invest your marketing budget.

Conversely, its vital that you encourage and embrace your big spenders and the speedy shoppers because these tiny segments are driving a massive percentage of your revenue.

There are so many metatextual layers going on here that I might need to have a lie down with a cold compress applied to my forehead.

I wrote about prank advertising earlier in the week, where I discussed the relative merits (or lack thereof) of six recent examples, then shortly after I was directed towards this series of online videos…

Over the past few weeks online retailers have begun unveiling tools aimed at inspiring shoppers as they search for Christmas gift ideas.

I’m unconvinced as to whether these features have any impact on sales as they often appear a bit gimmicky, but judging by their popularity among retailers they presumably achieve some kind of ROI.

I’ve already reviewed Argos’ rather quirky Gift Finder which offers a unique browsing experience at the expense of usability, so in the interest of fairness thought it would be interesting to take a look at how other brands are catering to Christmas shoppers.

Here’s what I came up with…

Effective site search functionality on a company’s website is an increasingly important component of a successful digital strategy.

Companies are typically increasing their investment in site search because they recognise the range of benefits that effective technology can bring to their businesses.

Terms that consumers type into a company’s site search box can give a company huge insight into the users’ behaviour and give the company invaluable data to be learned from.

This advice compliments trends found by Econsultancy through company research to provide a diverse range of key takeaways.