The viral video was originally released on popular Chinese blogging site Weibo, which has seen millions of searches for Uniqlo since the world got wind of it.

In fact, so much attention has been directed to Uniqlo in the past week that some have even suggested the retailer could have been behind the video, something it denies.

The company said in a statement:

We would like to remind the public to uphold social morality and use our fitting rooms in a correct and proper way.

But while Uniqlo doesn’t appear to be amused, some brands have sought to get in on the action.

As Clickz’s Sophie Loras detailed, a number of companies, primarily in China, have incorporated references to the sex tape into their digital communications.

A Chinese hotel brand reminded Weibo users that its rooms “are as big as 18 fitting rooms,” while mattress maker ARIS compared the comfort of its products to a Uniqlo fitting room.

Even brands that didn’t attempt to capitalise on Uniqlo’s fortune or misfortune have become involved in the incident.

“User-generated content is also being created around the size and brightness of H&M and Zara change rooms,” Loras noted, and a fake parody Weibo post designed to look like it came from Harrods joked that the retailer was limiting Chinese couples to 10 minutes in its fitting rooms.

One thing seems clear about the Uniqlo incident: it isn’t likely to hurt the company’s brand. However that doesn’t mean Uniqlo really stands to gain anything either.

Yes, the company has seen searches for its brand increase, and the Beijing store where the video was filmed has become something of a tourist attraction. But when all is said and done, the incident will likely be forgotten in a matter of weeks, if not sooner, something Uniqlo probably won’t complain about despite the fact that the retailer has likely enjoyed an increase in certain vanity metrics.

More interesting is the impact of the consumer reaction to the Uniqlo sex tape on other brands.

Some media reports incorrectly attributed user-generated and fake content to H&M, Zara and Harrods, demonstrating the fact that companies have a limited ability to control how consumers interact with their brands online.

Fortunately, even the companies that found themselves incorporated into parody don’t really stand to lose or gain from the incident, a reminder that while not always true, “there’s no such thing as bad publicity” is truer than ever in the realm of social media.

Not sure who your mythic hero is or where you put your narrative crucible? Start simple with these handy storytelling tips… 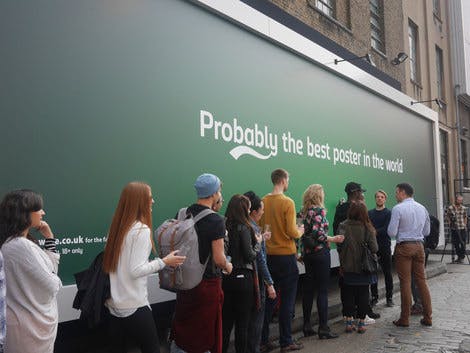 Disclaimer: I don’t actually like Carlsberg. The taste, I mean. Yet somehow I seem to end up drinking it. And that’s kind of the point.