By adding a simple JavaScript program, you can link your own data to AdWords, to create rules for your campaigns, or customise reports.

For example, if you’re a retailer, you can link your inventory data to AdWords, to change bidding on a campaign, or stop/start keywords as items go out of stock. Or you can automatically change keywords or bidding on AdWords, based on data trends.

You can pretty much do anything you want, in fact. We’ve created a sample script to set up an alert on an AdWords campaign, which we’re happy to share.

Google has just put AdWords Scripts on general release (after a limited release in June this year), which lets you link your own data to AdWords campaigns.

Some of the big search technology firms already offer things like inventory linking, of course, but the beauty of Google opening its system up for general use is there’s now no need to build an expensive tool from scratch (or pay someone else for theirs) or worry about getting API authorisation. Google’s done the work for you.

Google has made the process pretty accessible: so as long as you have a tech-minded person to write the scripts for you, you can schedule changes, create reports and set up alerts. Most things are possible through the AdWords Scripts interface. It’s not quite like having access to Google’s API, but if you’re familiar with JavaScript, there’s a lot you can do fairly simply to manage your AdWords campaigns.

Google used to let you create custom alerts, but removed this feature earlier this year. Now, though, you can create customer alerts by using scripts, so to test the system, we created a sample script for alerts – and as we’ve created it, we thought we’d share it, and hope it’s useful.

It is a simple piece of JavaScript that will alert you if your campaign suffers a drop of 80% or more in impressions (something you’d want to know, as it would be a reasonably sure indicator that something’s gone wrong).

If you’re interested, it’s below. You need to copy and paste the text into a new script in the Automation page in AdWords, from the left-hand navigation bar.

There are two sections you need to change before you use it, both at the top of the code:

Once you’ve done that, you need to hit ‘authorise’, save the script and set the schedule (I recommend setting it to ‘daily’ at 8am).

The script to copy and paste is below. Let me know how you get on!

//Set the threshold of impression fall to send an alert
var threshold = 80;    //Change this to adjust the percentage fall threshold

//Set the email address to alert in case of changes
var strAddress = “changethis@example.com”;    //Change this to adjust the email recipient

//Loop through all the ad groups
while (adGroupsIterator.hasNext()) {

//Get the next ad group as an object
var adGroup = adGroupsIterator.next();

//Check for a large enough drop in impressions
if (yesterdayImpressions       {

//Send an email with a list of changed ad groups
generateMail(messagebody, strAddress, threshold);

//messagebody will be an empty string if no lines have been added
if (messagebody != “”)
{

//Construct the email and send it with an html body and a list of the inline images
var subject = “Ad Groups with >” + threshold + “% Impression Drop”;
MailApp.sendEmail(recipient, subject, “”, {htmlBody: messagebody,});

New research shows that MoneySupermarket is outperforming the major high street banks in search visibility for many consumer financial products.

StickyEyes‘ Online Consumer Finance Intelligence Report shows that the price comparison site achieves the highest visibility in organic search for common financial products such as current accounts and savings, but also in more lucrative categories such as mortgages and loans.

While price comparison sites provide many of the traditional brands with the necessary means to advertise their products online, they also go head-to-head with the very same operators as they compete for premium positions within SERPs.

The report takes an in-depth look at several different banking sectors, but here we highlight the results for mortgages and credit cards. 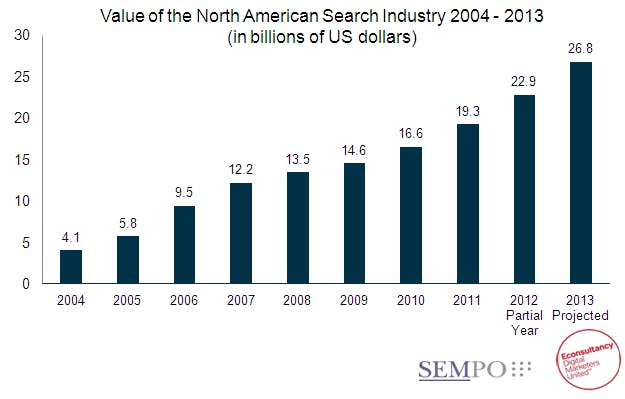 In its eighth year, the State of Search Study from SEMPO and Econsultancy has been a record of growth. After slowing in 2008-2010, SEM has returned to robust growth of nearly 19% in 2012.

But change is afoot, with more marketers prioritizing integration and attribution in SEM.