However, most voice search studies give an isolated snapshot of voice trends that may be heavily dependent on when and how they were conducted. Few voice search studies, for all that they might draw on past research or speculate about the future, are conducted over a period of multiple years or replicated at different points in time to show a definitive trend.

That’s what makes a recent voice search study by HigherVisibility, published just after the New Year, so noteworthy. The research piece, entitled ‘How Popular Is Voice Search?’, was originally run in 2017, and carried out again in 2018, producing some intriguing insight into the changes in voice search habits, perceptions and demographics over time.

In both years, HigherVisibility surveyed more than 2,000 mobile phone owners in the U.S. on their usage of voice search – primarily mobile voice search, with some additional insight into their use of voice search on smart speakers.

The most recent study yielded some surprising findings about declining voice search usage, decreasing user trust in voice assistants, increasing usage of voice search amongst older generations, and a number of other interesting trends. What can we learn from them about the state of voice search going into 2019?

A handful of respondents in these categories may have made the step up to frequent voice search use (once or more per day), explaining the increase in that category. Overall, however, it seems evident that the novelty of voice search is beginning to wear off, with fewer people opting to use it as a search method on the odd occasion, instead defaulting back to typed search.

Fewer respondents believed that using voice search was “fun” in 2018 (12%) compared to in 2017 (15%) – further supporting the theory that voice might be losing some of its novelty factor.

A greater variety of use cases

Fast forward to 2018, and the popularity of using voice search in the car has declined significantly to 35% – slightly surprising considering that car manufacturers are now producing cars with in-built voice assistants to cater to this demand. However, the percentage of people using voice search in almost every other scenario rose between 2017 and 2018, showing that searchers are finding a greater variety of use cases for voice.

The percentage of respondents who made use of voice search with friends or family also rose to 6% in 2018, up from just 0.4% in 2017 – suggesting that people are becoming more comfortable with using voice in a public setting. This rise may also have come about as a result of the increased popularity of smart speakers, which are more likely to be located in communal areas and shared by an entire household. 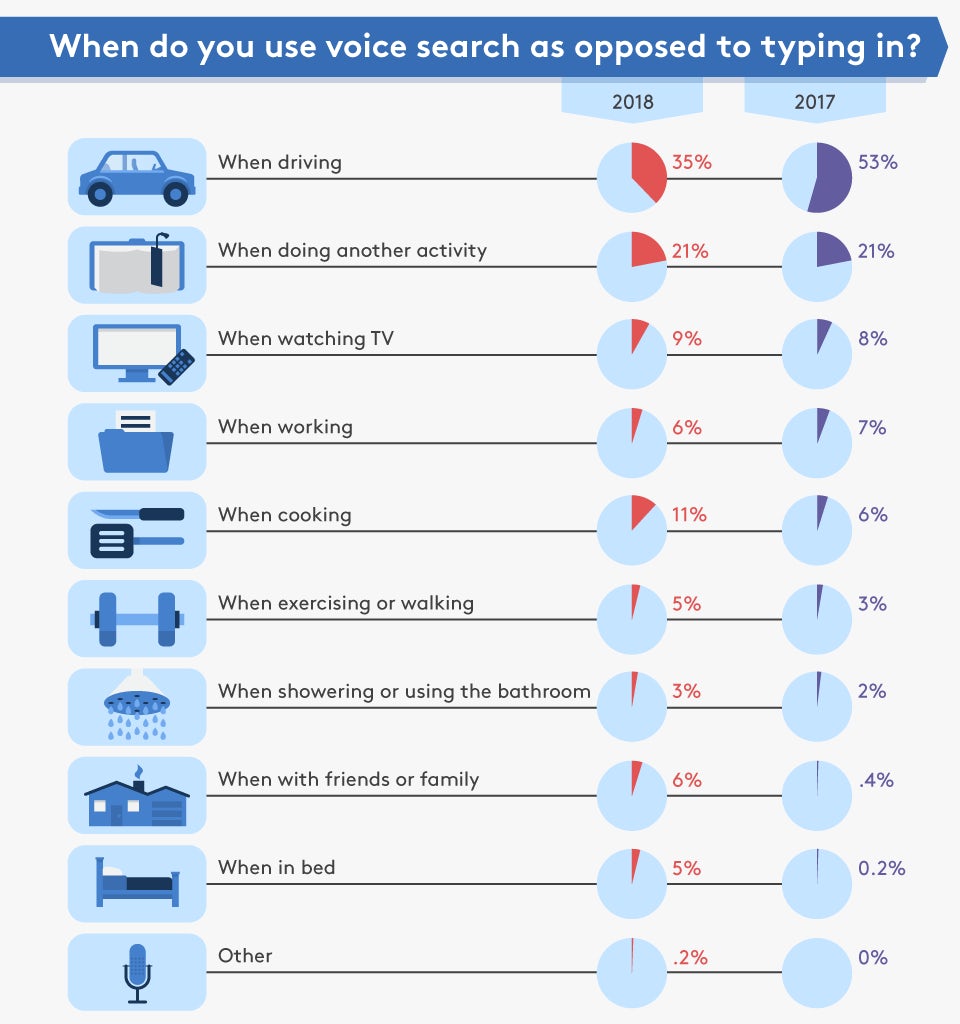 For this reason, optimising local search presence is frequently cited as a best practice for businesses aiming to improve their discoverability via voice.

Perhaps one of the most surprising findings highlighted by HigherVisibility is that fewer people seem to trust the accuracy of voice in 2018 than they did in 2017.

In 2017, 87% of mobile users surveyed felt that voice search was accurate, but by 2018, this figure had dropped to 82%. Voice search users also had less trust in their individual voice assistants, though the figures varied from assistant to assistant.

In 2017, all four of the major voice assistants – Alexa, Siri, Assistant and Cortana – were overwhelmingly perceived by their users to be accurate. Cortana was the most trusted for her accuracy, with 93% believing her to be an accurate voice assistant, closely followed by Alexa at 92%, and then Google Assistant at 91%. Siri lagged a little further behind, but still managed to convince four fifths of users (82%) of her accuracy.

The voice assistants that mobile users perceived to be most accurate in 2017. Perhaps surprisingly, Microsoft’s Cortana topped the list.

In 2018, however, users were less satisfied with their voice assistants across the board. Alexa came out on top with 88% of respondents perceiving her to be an accurate voice assistant. Google Assistant leapt up to second place, trusted by 87% of users for her accuracy, followed by Siri at 77%.

Trust in Cortana as a voice assistant, however, fell dismally, with only 74% of Cortana users believing her to be accurate in 2018.

While voice assistants are still trusted by a clear majority of their users, the decline in perceived accuracy is unusual, as assistant voice recognition and responses have typically improved over time, as companies implement upgrades to their technology and the assistants learn from a wider variety of interactions with users.

And while it’s difficult to confirm a correlation between users’ decreasing trust in voice assistant accuracy and the decline in usage of voice search, there is a possibility that it may have turned some away. 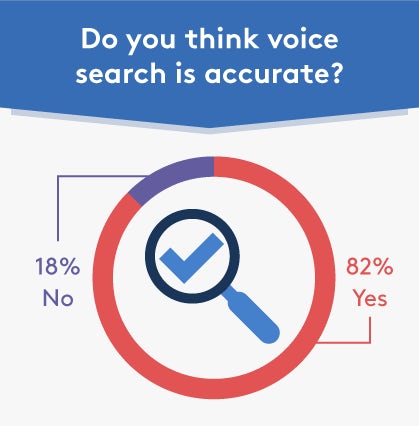 The age demographics of voice search users also appear to have shifted between 2017 and 2018. While in 2017, “Millennials were more likely to put their personal AI assistants to task with nearly as many search phrases as Gen Xers and Baby Boomers combined” as noted by the report author, older generations’ use of voice search has since caught up. HigherVisibility’s 2018 survey “found no significant difference in the top voice commands by gender or age.”

However, there are still some differences in the way that different age groups use voice search. Millennials were reportedly “more likely to use voice search assistants to help them interact with the outside world”, searching for things like film times or traffic updates. Older generations, meanwhile, “have increased their use of voice assistance technology since our 2017 survey, even surpassing millennials in the use of certain voice commands.”

Clearly, voice search isn’t just the preserve of technologically hip young people any more, and a more varied demographic getting to grips with voice search is definitely a good thing.

However, other findings from HigherVisibility’s study – namely, the waning interest in voice search among casual users, and the decline in trust in voice assistants – bode less well for the future of voice search.

It’s true that two years’ worth of data don’t necessarily a definitive trend make, and it will remain to be seen whether the pattern holds up in future editions of the study. But these findings are also far from the only dismal news coming out of the voice sector.

As Patricio Robles recently pointed out, voice commerce also looks like it’s far from living up to expectations, with leaked figures showing a lack of uptake, and Amazon failing to support its claims that customers’ use of Alexa for shopping this holiday season far surpassed last year’s with any hard figures.

HigherVisibility is blithely optimistic about the future of voice search despite the findings of its own study, writing that, “as the functionality of voice search increases and consumers become more familiar with everything it can do, we expect its popularity to grow. Already, the majority of mobile phone owners have begun to incorporate voice search into their everyday lives. Nearly 60 percent of those surveyed in 2018 use voice search at least once per month, and nearly half use it weekly or daily” – neglecting to mention that both of these figures were higher last year.

I’ve previously written about the fact that the number of bona fide voice searches that can be ranked for is only a small fraction of the larger pool of voice commands and other interactions that tend to be classed as “voice search” – even though many of them don’t even involve a search engine.

So, while it’s encouraging to find that diversity – of both users and use cases – is increasing amongst the people who do employ voice search on a regular basis, these trends aren’t likely to be significant to marketers unless we see a dramatic explosion in voice search adoption over the next few years. And right now, the signs are indicating the opposite.

It’s time to regale you with the best digital marketing stats we’ve seen this week.