Web design may be maturing, but it’s still subject to fads, fashions and whims.

If we’re lucky, who knows, some trends might just be user friendly.

1. The death of flat design

In our UX trends for 2018, Will Grant of Prodlytic says he hopes “to see the tide turn again against flat design and a return to (subtle) visual affordances in UI across the board.”

As early as 2014, Co.Design was asking “Is flat design already passé?” And this year designers are all talking about drop shadows and gradients again, the affordances that Grant talks of.

Indeed, a study by Nielsen Norman Group in 2017 showed that users took 22% longer to navigate through an ultra-flat design. I’m not exactly putting my neck on the line in predicting video will be big. It already is. From media sites that are pivoting to video, to more ephemeral video on social networks, and video in website design – it’s everywhere.

Video, however, remains a bit of a controversial web design element to some UX professionals. Especially in ecommerce, it can be seen as a distraction, lumped in the same category as auto carousels (just read the comments on a previous article about video backgrounds).

However, as always, the usefulness of video depends on what the website and designer are trying to achieve. I still believe hero/background video has a place on desktop – for example, click through the GIF below to visit the new Barbican website (launched in late 2017) and I defy you to say the video background doesn’t convey the scale and splendour of the Barbican’s architecture.

Away from backgrounds, John Moore Williams writing on the webflow blog highlights the utility of the <video> HTML element. Williams says:

It can slip seamlessly into the design…

It can be looped to…repeat for those who need it

Check out the webflow homepage and you can see an example of this, captured in the GIF below. As I scroll below the fold, there’s a video element showing me what the software looks like in action. As Moore says, the beauty of video is it’s ability to “convey complex information” – surely a great tool for B2B websites, for example.

Parallax scrolling has been and gone, with many designers recognising that slow load times and a negative impact on usability represent too high a price to pay for the effect.

But that doesn’t mean there can’t be joy in scrolling. One of my favourite examples is the use of an attached background image that doesn’t scroll with the page.

Sticking with the Barbican website, you can see an example below. Okay, it’s perhaps not the best example, given the white text isn’t the easiest to read, but the effect certainly has an impact.

There’s another great couple of examples on the Made by Many homepage.

This is also a trend we may see more of in digital advertising, with the scrolling format already pretty well established and using similar principles to catch the attention of the viewer.

Below are a couple of examples, one on mobile (via the IAB) and one on desktop (via Sizmek’s library of ad formats).

This format is seen as a postive experience for the user, in that they get to control the reveal (and disappearance) of the ad, and therefore it doesn’t impose as much as a sticky ad might.

There are parallax scroll ad formats, too, which aren’t dissimilar, though they do take longer to load and are arguably a little more disorienting.

4. Death of the ghost button

Arguably this isn’t a big deal, but I feel compelled to address it, given the ghost button is one of the web design trends we have trumpeted in previous years.

Christopher Ratcliff rightly pointed to the boom in ghost buttons at the end of 2014, referring to them as “not quite a call-to-action. Perfect for designers not wishing to clutter their sites with albeit necessary navigation.”

Unfortunately, this proved to be too accurate a description i.e. these buttons simply don’t call the user to action.

A fantastic blog post by Bartholomew Fish details the provenance of ghost buttons (coming out of flat design) and shows some highly missable examples.

The problem is that ghost buttons don’t offer sufficient contrast when placed over busy imagery or text. Similarly, if button text colour is too similar to background image colour, there can be a contrast issue.

The result can be a 20% decrease in clicks, according to some studies detailed in Fish’s blog post. Sticky or fixed navigation, such as header menus that follow you (or stick in place) as you scroll down a page, is not particularly new. But as retailers redevelop their ecommerce sites, it’s a design feature we are seeing more and more of. Argos’s product page on desktop (with sticky ‘add to trolley’)

In fact, the aforementioned John Moore Williams of webflow even highlights a possible trend for floating header menus – this is the same principle but the menu appears to float, allowing the homepage visuals to continue behind them. See the homepage of Le Réseau COOP for a good example.

A trend for a few years now – typography as visual. Serif fonts are making more of an appearance, too. Brutalism is a style of architecture that flourished in the 1960s and is so-called after Le Corbusier’s description of one of his materials, béton brut (raw concrete). Seeing as we’ve mentioned the Barbican twice already, it’s worth pointing to again as perhaps the most famous example of a brutalist development in the UK.

Anyway, it seems the term has been co-opted into web design at some point in 2016. It’s worth checking out a wonderful template for UX brutalism created by the UX Design Collective.

Brutalism is a style most often seen on adventurous agency websites and artist websites – generally fairly limited affairs in terms of number of pages and degree of functionality.

However, 2017 saw brutalism get a lot of attention thanks to the Balenciaga ecommerce website redesign. You can check out a thorough Econsultancy review of the site from back in July. For all their doubts, most of our commenters admired Balenciaga’s bravery.

Will we see more luxury brands turn to their cement mixers? Twitter replaced square profile photos with round ones in 2017, as well chamfering off square edges throughout its design.

Google, too, got its plane and its sandpaper out and had a go at those dangerously sharp edges on its search box and cards. Airbnb Lottie is a library that allows “apps to use animations as easily as they use static images.” John Moore Williams highlights it as one of the many tools emerging to help designers create more complex interactions.

I needed something for the 10th trend in this list. Will web VR enter the average consumer’s life? I doubt it (and Mark Ritson scoffs at the idea). But Google is still curating experiments.

In reality (sorry about that), AR seems most exciting as we enter 2018. 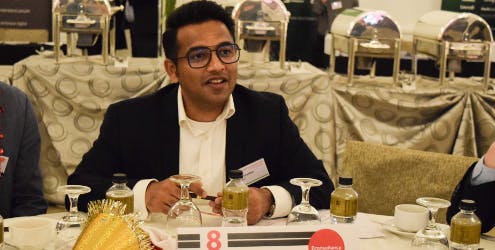 2017 was a tough year for brands. Sales continued to shift from stores to ecommerce, and ecommerce was increasingly dominated by marketplaces.

So how are ecommerce managers at brand reacting to this threat?  And what else will be on their minds in 2018?

Once the hallmark of fashion print magazines, lookbooks are a great way for brands of all kinds to showcase their products online.

Not only does the medium allow brands to tell a story – helping to set a particular mood or enhance a theme – but it also puts products in context and highlights corresponding items to drive additional sales.

Last month, Calvin Klein announced a new collaboration with Amazon Fashion for the 2017 holiday season. Along with an exclusive online shop, it has opened two pop-up stores in New York and Los Angeles to run until the end of December.

Previously, Calvin Klein has given department stores first access to its new ranges. This time, however, shoppers won’t be able to get their hands on fresh Calvin’s anywhere but Amazon until January – long after the Christmas period has finished.