Fast forward to 2018 and the low code market has expanded massively with a wide range of services providing differing levels of technical sophistication. Whether you’re a developer or marketer, small business or large organisation; it’s highly likely there’s a product which caters to your needs.

So, it’s no surprise that low code platforms are predicted to become a key driver of change and growth over the coming decade. According to research by Forrester, the market is forecast to grow almost five-fold from $4,350 in 2018 to $21,239 by 2022.

Here, I will explore some of the driving forces behind the low code revolution, how it’s shifting control to creatives and marketers, and how some of today’s market leaders are changing the way we develop digital experiences.

The phrase ‘low code’ has often been used as a blanket term to cover both no code and low code platforms. Indeed, the above-mentioned Forrester report does exactly that – but there’s an important difference between the two.

This principally comes down to the approachability, ease-of-use and the level of technical knowledge that the user is assumed to require.

‘No code’ platforms typically provide a visual interface which enables users to quickly piece together a website or application. At the most basic level, this allows users to drag and drop selected objects onto the page and then re-size templates and change colour schemes to achieve a ‘custom’ design.

These platforms are usually aimed at ‘citizen developers.’ These are the business users – neither developers nor designers – who are empowered to build functional but generally limited apps without having to write a line of code.

Inevitably, this means that true extensibility is not an option. You can only play with the tools provided which means there’s no opportunity to add code around it.

Alternatively, a low code platform is mainly used by professional developers and design teams as a way of streamlining and simplifying their work. It enables them to deliver enterprise-grade applications with little or no hand coding, but it still assumes some technical skill from the user.

The key benefit with most low code applications is that developers can still get ‘under the hood’ and add bespoke features and designs limited only by their imagination, coding skill and the time constraints of the project.

This is partly what’s meant by the term ‘enterprise’: it’s extensible and flexible: the low code platform is not a means to an end, it can be infinitely augmented by bespoke code.

Unleashing the creatives: ‘the democratisation of technology’

Many of the business benefits of low code and no code platforms are self-evident. The time it takes to build an application can be massively reduced, while changes to existing applications can be made far more rapidly thereby increasing marketing agility.

It also means that the development process is no longer restricted to a small pool of developers and is instead widened out to a much larger community of designers and marketers. Martech expert Scott Brinker has described this shift as ‘the democratization of technology’:

“It’s a progression of taking the power to create and discover out of the hands of an elite few and putting it in the hands of the everyday many.”

This shift in power is demonstrated by the graph below: [source: Scott Brinker, ChiefMartec.com] 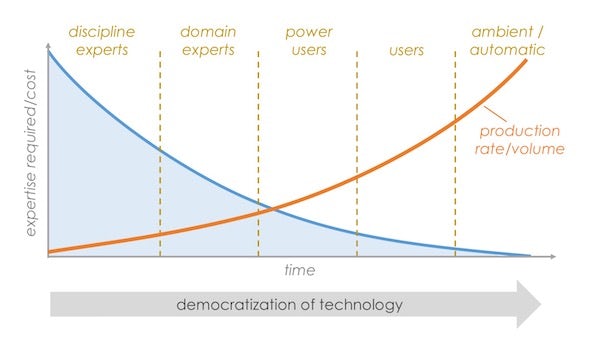 It illustrates how marketing technology is moving away from being the domain of a select few specialists and into the hands of a wider community of users. But Scott goes even further by predicting the future beyond no code where the role of automation and AI takes a more significant role in the design and build process.

The overall shift of power solves a number of key – interlinked – issues for organisations and digital agencies.

One example is the current dearth of talented developers which creates a workflow bottleneck for many digital teams. This leads to an ever-extending list of tasks and processes, hopes and visions, stretching out beyond the horizon. Rather than a ‘wish list’, it becomes a ‘wishful thinking list’ as ever more detailed user metrics highlight an increasing number of user experience issues that need resolving; to a shrinking team of developers.

But with the growth of low code platforms, a greater number of users can get involved with implementing design and build processes, and leave the development team to work on the stuff that’s truly innovative.

Today’s no code and low code platforms can cater for a wide variety of business needs. Whether it’s a small start-up looking for a basic customisable web page, or a digital agency which requires an enterprise level app builder which can be integrated with code; there are plenty of options available.

Here’s a few examples some of the key platforms currently in the market:

With such a vast range of low code tools now on the market, it’s perhaps no surprise that in a recent survey 88 per cent of IT leaders said they were looking at and evaluating low code solutions. (Source: HBR/Saleforce 2017).

If low code hasn’t yet arrived at your organisation, it soon will do. 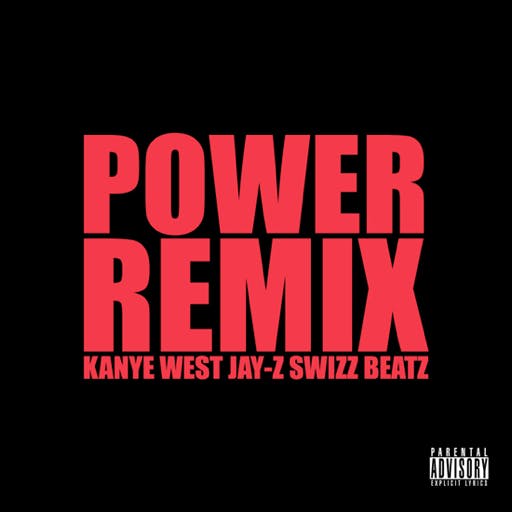 There are a lot of lessons marketers can learn from the music industry, and in particular, how artists release their projects.

Before streaming became the force that it is today, some album releases used to be more like moments in history than just another Friday album drop (sighs).

From surprise releases, to experiential events, there have been a myriad of innovative ways musicians have grabbed their audience’s attention to sell us their latest love ballads, rock anthems, or hip-hop heat-seekers.