Pinterest’s potential isn’t an all-or-nothing proposition. But if you’re a digital manager, you need a clear point of view on this for those you advise.

This is the first in a series of three posts taking a strategic view of what’s shaping-up to be 2012’s breakthrough new social network.

Pinterest, in case you haven’t heard of it, is Tumblr with some different features. Like Tumblr, it allows you to post your own stuff, as well as stuff you find around the internet, with the click of a button.

Where Tumblr is a blog variant, Pinterest lets you set up sub-blogs built around a particular interest or topic. So you can post all the cute pictures of pugs on one board and all the pictures about the economy on another. It also lets you search everyone else’s boards easily.

That’s really about it. One friend described it as “Delicious for pictures”. Of course, delicious is text-driven and used by guys, while Pinterest is a scrapbook designed to drive relentless word-of-mouth referrals among women and apparently, Silicon Valley investors.

The size of Pinterest’s splash

So why is there so much buzz around this? The numbers: The site beta-launched in March 2010 and is still invite-only.

Despite this, the user base surpassed 10m in December, and according to Google DoubleClick, now has 21m worldwide unique visitors per month. 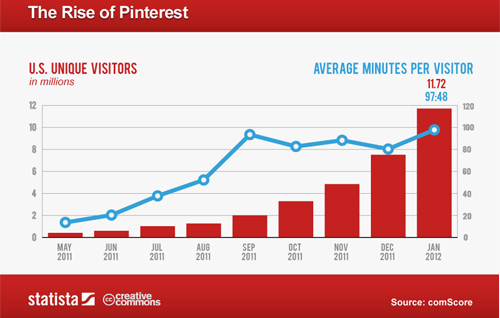 Pinterest is well known for having a demographic of 18-34-year-old, upper-income women from the Midwest – if that’s not who you sell to, then Pinterest may not be for you,’’ she said. “I’d ask, can you afford to be playing with pretty pictures when there are other, more urgent, interactive marketing priorities?’

Of course, as women make a huge range of purchase decisions for themselves and others (think travel, health care, home goods, food) having first-mover advertage can be an attractive proposition to many brands.

One of the things I appreciate about Pinterest is who uses it. When I look at the people I’m connected to on Google+, most of the posts I see are from a small number of tech-savvy ‘early adopter’ social media windbags.

They post a lot. But I don’t see ordinary people on G+. Not as they are on Facebook, and Pinterest. There are many more ordinary people in this world. Unlike G+ and Twitter, Pinterest didn’t have to jump a chasm to get to a majority market, its where they started.

And Pinterest is easy to use. Lots of people don’t get Twitter, or the value of an unstructured stream of 140 character utterances. But organizing collections of inspiring images is a natural, even reflexive task. Its social media, but with only the need to curate images you like. That’s a low barrier to participation.

The social media hype cycle is suggesting the solar system has a new axis called Pinterest. Is it wrong?

This just has the feel of Color– remember Color? Less than a year ago it scored $41m of investment for its photo-sharing app from Sequoia and Bain Capital. And in social media it was everywhere — for all of two weeks.

Then everyone forgot about it after realizing its business model was the classic “Make something cool and hope Google buys it.” (And believe me, I have nothing against that business model. All offers cheerfully considered, Mr. Brin.)

It turns out Pinterest is staking out a highly valuable position in the marketing universe.

Hannibal Lecter, the fantastic bad guy in Silence of the Lambs reminds us of a marketing truth when he asked his interrogator, “And how do we begin to covet, Clarice? Do we seek out things to covet? No. We begin by coveting what we see every day…Don’t your eyes seek out the things you want?”

Before someone heads to Google to search with intent, they have to discover what they want. Sites like Pinterest start up to the Top of Funnel (TOFU) where sentiment gets formed.

Picture your friends making up lists right now of the best things they want. The list of the things they want can inspire others. If even a fraction of this demand can be directed to merchants, then there’s a new conduit of demand, one that circumvents search. That’s why marketers should care.

But the tide that brought attention to Pinterest can quickly shift. It would shift especially quickly if people start getting cranky about copyright issues. And then there are those pesky questions about Pinterest needing a business model.

So next we’ll talk about the clever legal finesse behind Pinterest, which is what it takes to handle a potential copyright bomb.

Citroen has integrated interactive ‘digital watermarking’ into its latest direct marketing initiative to connect customers with local dealers through their smartphones.

A brochure created to celebrate the launch of the brand’s DS5 model includes 576 individual watermarks within 192 different versions, with each linking back to a different showroom.

The watermarks are hidden within the images of the cars, so have no affect on the design or layout of each page.

At Digital Cream London we hosted the attribution management roundtable where we were joined by marketers from some great brands.

The brief was to share experiences and to discuss the issues surrounding attribution and path to conversion analysis.

The day highlighted some consistent themes that are key to many industries and in the interest of continued learning and development among both brand peers and experts, it seemed like a useful idea to document the hot topics and to begin to answer them.

So with ‘Chatham House Rules’ firmly in mind, here we go… The UK’s shoppers are adopting mobile and tablets, yet the high street remains central to the research and purchase process.

87% of survey respondents using a store as part of the purchase journey in the past month, though high prices, crowds, and the time taken are seen as drawbacks.

The stats come from Shoppercentric’s ‘Shopping in a Multichannel World’ survey, and the results show that customers are using a wide variety of channels.

Mary Portas may have managed to produce a retail review containing just three references to digital, but online and mobile is vital for the future of the high street.