These limited-edition products have been shared with make-up and fashion bloggers who are, as I write, busily trying them out and blogging about them.

Ford Retail is creating a happening and, in the meantime, making a whole new set of younger, more female, more colourful friends. The big challenge will be how they sustain and nurture these friendships for months and years to come.

Q: What are marketeers doing when they aren’t relationship marketing?

Old-school mentalities are hard to shift

When Maersk emerged in 2012 as a surprise social media pin-up, pretty much everyone asked: “What’s a shipping line doing social media for?” It’s hard to imagine that people who ship products around the world might also spend time engaging on Facebook, Instagram or Twitter.

And yet, of course, they do. Their friends, husbands and wives do too. Practically everyone does, to a lesser or greater extent.

So when Maersk was asked directly why they’ve invested in social media engagement, their answer, produced in this epic-sound-tracked video, was unequivocal: “So we can truly get closer to our customers”.

It’s pretty astonishing really. Here you have a B2B brand using social media for relationship marketing, while many consumer brands – whose customers are most certainly on Facebook, Twitter and Instagram – haven’t yet figured out where their next customer is coming from.

Yet there are lots of great examples of B2C companies leading the way. I hosted a webinar last week on Social Media Engagement for Retail. Alongside Celia Pronto, Marketing and E-Commerce Director for Ford Retail, we had Leo Tennant, who runs the social media team at online clothing store Boden.

Leo is part of a team of three Community Managers who spend their time engaging with Boden’s fans and followers. This is no mean task – the brand has over 160,000 fans on Facebook, 23,000 followers on Twitter and 26,000 on Pinterest – with a high degree of daily engagement.

It’s a time-intensive operation, yet when I asked Leo about the ROI Boden receives from his team’s relationship-building activities his response was very nearly incredulous: “The value to the brand is immense”.

While his team talks to everyone, there is a hard-core of 150 fans – known as the Boden Lovelies – who are especially close to the brand. Leo’s team knows them by name and relies on them for support across the social web.

They are customers, supporters, friends and advocates, rolled into one, the embodiment of the value that relationship marketing generates.

So, going back to my earlier point, why did Ford Retail come to the conclusion that it needed to engage more online?

Well, apparently, in recent years the number of pre-purchase visits to car showrooms that customers make has dropped from an average of eight visits to just one. In other words, for car show-rooms, the customer’s mind is almost always made up before they walk in the door.

That’s a pretty shocking behavioural shift, so I asked Celia if she felt it was partly down to social media. Her reply was unerring: “we believe it’s almost completely down to social media”. If this is right, our daily use of social networks has reduced the pre-purchase interaction we have with car retailers by a whopping 90%.

This obviously makes Ford Retail’s willingness to venture into nail varnish much easier to understand. It also offers an insight into why Maersk wants to be the dominant shipping company in social media and why Boden sees social engagement as a profitable investment.

But questions remain: who are these companies that aren’t taking relationship marketing seriously? What are they thinking? And, is yours one of them?

You can join Luke for a discussion on ‘Social Media Engagement: Customer Service or Relationship Marketing?’ at Social Media Marketing 2013 (London) on 24th Oct. 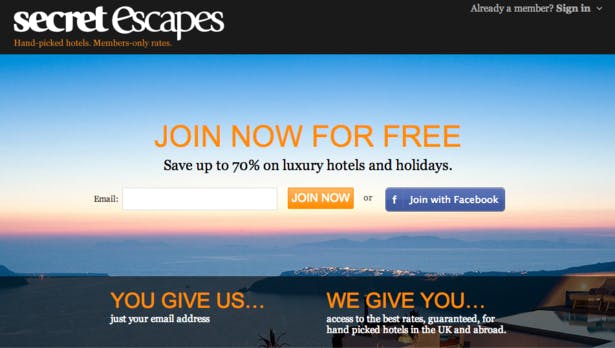 It’s Monday morning as I write this and, according to Sky Scanner, it’s coming up to the 12pm to 2pm window where I’m most likely to book a holiday.

The fact that 70% of that traffic is coming from a desktop computer clearly indicates how vulnerable one feels during those first few hours back at the office after the weekend.

So it’s with a blatantly ulterior motive that I present this comparison guide to the more ubiquitous ‘exclusive’ holiday websites, as if it’s a justification for furtively booking a holiday when I should be doing some work.

It’s that time of the week again when we take a closer look at a major brand’s social strategy and on this occasion I’ve chosen to examine Coach.

The luxury brand has a global presence so one would assume that it has a fairly large following on social platforms.

To find out, read on for more information how Coach uses Facebook, Twitter, Pinterest and Google+. This follows on from similar posts looking at Macy’s, Red Bull, ASOS and Nike.

And for more information on the brand read our review of Coach’s ecommerce platform, which it launched way back in 1999…