Here’s a case in point, below. We appreciate that our articles have been deemed worthy of upload into a cloud social curation tool, but it feels wrong to receive tweets like this, given how sharp man’s ability is to distinguish between man and machine (and find the latter unnerving). In this case I’ve anonymised the tweet, but you can see how the person in question has forgotten to personalise the tweet within the curation platform. Recommending related products is one of the most powerful tools of personalisation in ecommerce. ‘People who bought this also bought’, ‘you might like’ etc. However, you have to be careful how these cross sell groups are put together.

If you have a big product catalogue, things can get quite complicated. Similarly, recommendations can carry quite a lot of significance, as WalMart discovered way back in 2006 when its cross sell functionality started to group random DVDs together, with some consumers assuming that including ‘Planet of the Apes’ alongside African American titles was a racist act by someone at the retailer. Of course, it wasn’t but it shows the power of this technology.

Also powerful is presenting these products even after a sale is made, on the bottom of the home page, with some inkling that these are the types of products the customer favours.

However, certain products and the purchase decision behind them are nuanced enough to make this difficult. Here’s an example. I recently moved flat. I bought some boxes on Argos. After I had moved, I was still being pushed more storage solutions.

This isn’t necessarily detrimental, but it’s a reminder that these recommendations can quickly become incongruous. Ultimately, Argos has a simple solution to this problem, allowing one to get rid of personalised ‘recently viewed’ pods at the bottom of the page. This is perhaps old hat now, but it was one of the simplest ways that the absence of a human hand was flagged up in the early days of automated display ad placement.

There are better rules in place now to prevent this kind of thing happening, but as programmatic spending across enormous mobile networks is increasing, I thought it worth firing a warning shot. Just where are your ads appearing?

This kind of snafu still happens, but here are some examples from 2010. 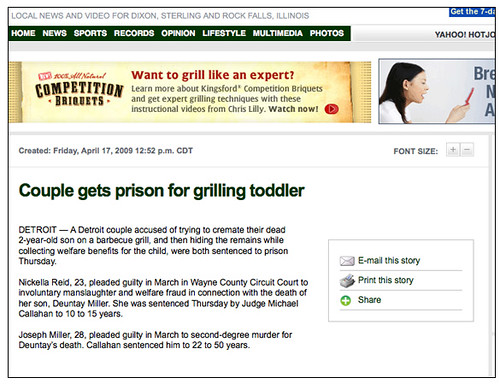 Personal but not personal. It happens a lot. It’s your first name in the greeting but the message doesn’t tally.

Here’s my favourite example, Shutterfly congratulating some people on being new parents, which is lovely if you’ve actually just had a baby and vaguely funny if, as in this case, not. Retargeting works. It generates clickthrough purchases (albeit with some degree of cannibalisation) and viewthrough numbers are impressive.

However, the figures can be skewed by a last click model that attributes conversion to retargeting rather than something higher up the funnel that made more of an impact. Upon closer inspection, the data can often point more to success with returning visitors than new ones when it comes to retargeting.

This isn’t automation going wrong, per se, but I wanted to highlight how complex technology and user journeys can often obfuscate things in the purchase funnel. Getting on top of data and attribution is a difficult task, but one you need to undertake to realise the benefits of technology.

Better lock the doors, turn off all the lights and cling to your favourite comfort blanket, Halloween is getting closer.

Whether on video, social, or just giving their website a spooky little makeover, brands are doing some fittingly disturbing things this year.

Here’s a round-up of some of my favourites.