I’m not usually the type of person to give email marketing the time of day.

Between the frankly excessive amount of email newsletters that I’m signed up to and the numerous utilities-related emails, shipping notifications, and other admin that lands in my inbox, I have a lot of email I never get to, and if I’m not interested in something, I’ll happily ignore it or unsubscribe without feeling any remorse. And among the types of emails that I’m likely to actually open, brand or marketing-related emails have never been high up the list.

But like many people, I’ve made a few different purchases in the last six months from brands I’d never shopped with, or never shopped online with, before the Covid-19 pandemic. And one of those brands has had me opening and engaging with its email marketing on a regular basis since my initial purchase: Whittard of Chelsea.

I’m a fan of tea, coffee, hot chocolate and all variations thereof, and I’m not averse to spending a little bit of extra money on an interesting new type of tea or a higher-quality hot chocolate, so in a sense I’m squarely in the target market for Whittard’s products. But if it hadn’t been for the quality of their email marketing, I doubt the brand would have stayed so firmly front-of-mind in the three months since my initial purchase, or that I would have made another purchase recently and been planning to do so again in the next few weeks.

Here’s what has impressed me so much about Whittard’s email marketing, and why I’ve found myself engaging regularly with the brand’s emails in a way I almost never do.

When I made my initial online purchase from Whittard (a type of loose leaf tea that I’d bought from a shop ages ago and finally run out of, and some mocha hot chocolate, as a treat) it was the middle of summer and I was enjoying the unexpected perk of being able to work outside in the sunshine on a regular basis. (WFH does have its benefits, as it turns out). In the midst of this, the subject line on one of the first emails that Whittard sent me caught my eye: ‘One hot chocolate, three milkshakes’.

The email laid out how to use Whittard’s ‘Coconut White Hot Chocolate’ powder to make three different milkshakes: the Coconut Freakshake, Iced Piña Colada, and Coconut Chocolate Frappe. It also advertised two types of glasses that you could use to drink your milkshake out of – which, helpfully, Whittard also sells. I was intrigued enough to go on Whittard’s store and check them out, and although I didn’t wind up making a purchase, I did use the ideas from the email to make my own milkshakes with the hot chocolate powder that I’d bought from Whittard recently.

This had me interacting with Whittard’s product and appreciating it in a new way – as it was summer, I might not have otherwise got round to drinking the hot chocolate for a few months when the weather was cooler. But Whittard was able to pique my interest with seasonally-appropriate messaging, and the type of email that didn’t just hawk a product, but showed you ways to get the most out of it. Advertising the glasses was a clever add-on that showed off the breadth of Whittard’s product range, beyond ‘just’ the teas and coffees themselves. 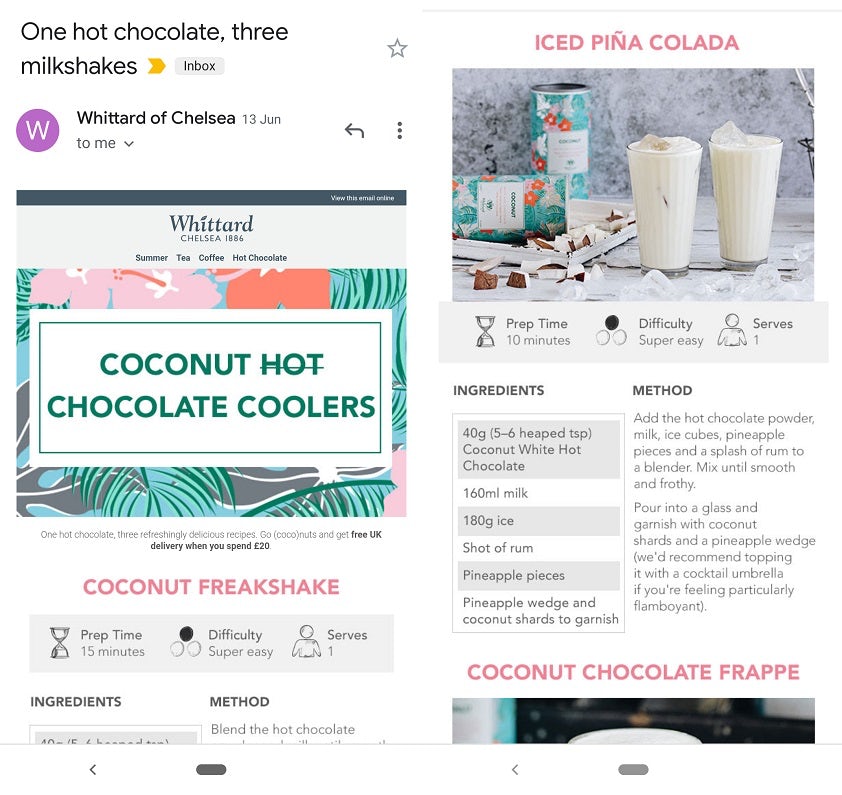 Whittard’s email marketing frequently features recipes aimed at inspiring shoppers to get creative with its products, from using hot chocolate to make milkshakes to cake recipes that use teabags for flavouring. (Image: Whittard of Chelsea)

Over the next few weeks I got semi-regular emails from Whittard with recipe inspiration, new products and offers like free UK delivery. The new product emails were nice, but the recipe emails were what kept my interest during what I like to think of as the “post-purchase danger zone”: those weeks after a purchase when you realise you’re now on the hook for email marketing from the company, and have to make a decision about whether to continue engaging. I remember considering whether I should just unsubscribe and spare my inbox, but deciding to stay signed up because I liked the recipes. (I even starred one of them – an email entitled ‘How to make summer bakes’ that contained a recipe for a Lime and Mango Sorbet Cheesecake using one of Whittard’s iced teas).

While they didn’t directly lead me onto any additional purchases, the recipe emails were fun, kept me engaged with the brand at a time when I could easily have churned away, and felt like something additional that the brand was giving me at no extra cost. Which is always a good feeling.

It’s always nice to feel like your opinion counts for something – and if you’ve had a say in the making of something, you ultimately become more invested in its success. So it was a pretty clever move for Whittard to involve its email subscribers in determining the new hot chocolate flavour that would grace its shelves in 2021.

Over three successive rounds of voting, Whittard invited its community of tea, coffee and hot chocolate fans to vote for their preferred hot chocolate flavour – which meant that they were likely to pay attention to subsequent emails to find out which flavours had been knocked out, and, ultimately, which had won the day.

I took part in the voting and while I’m sad to say that my preferred hot chocolate flavour did not make the cut (Cookies & Cream lost out to Chocolate Cherry Brownie in the final round), it was fun and again, kept me engaged and invested in the emails that were arriving in my inbox every few days. The voting also doubled as a strategy for Whittard to attract new subscribers to its emails, as shoppers on its website could also get involved in the voting and then enter their email to receive future updates. And of course, for those voters who were keen on Chocolate Cherry Brownie, there’ll be a ready-made customer base keeping an eye out for the product when it debuts next year. 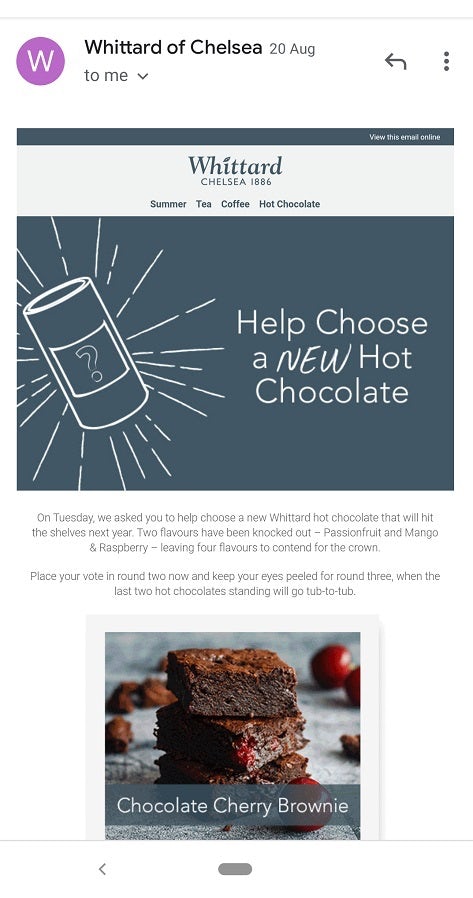 Whittard invited its customers to take part in voting for the new flavour of hot chocolate that would be released next year, creating a buzz around the new product and engaging its customer base in the process. (Image: Whittard of Chelsea)

In another example of Whittard inviting and acting on input from its community of shoppers, Whittard recently started adding free ‘coffee brew bags’ to every order placed online in response to customer demand for free coffee samples. Free product samples are something that you normally only benefit from when buying in-store, so it’s nice to get this from an online shop – and it allows Whittard to win points from its community by implementing a suggestion made by numerous customers. Whittard also encourages shoppers to leave a review of the sample, giving it more customer feedback to act on and make use of in its marketing.

Emails about new and limited-edition products are nothing unusual, but that doesn’t mean they can’t still be used to great effect. I’ve been enticed by a number of Whittard’s emails advertising new product offerings, or introducing me to new types of tea and coffee.

One notable example put the spotlight on Puerh (or Pu’er) tea, a unique and sought-after type of tea from China’s Yunnan province, and which many customers are unlikely to have come across. The subject line promised “Your Puerh tea questions answered”, and contained details on Puerh tea’s taste profile, fermentation process and origins, complete with attractive imagery and a “Nifty Tip” from an expert tea buyer on how to get the most flavour out of Puerh tea leaves. The email manages to make the topic accessible while also making the reader feel as though they are gaining insider knowledge. 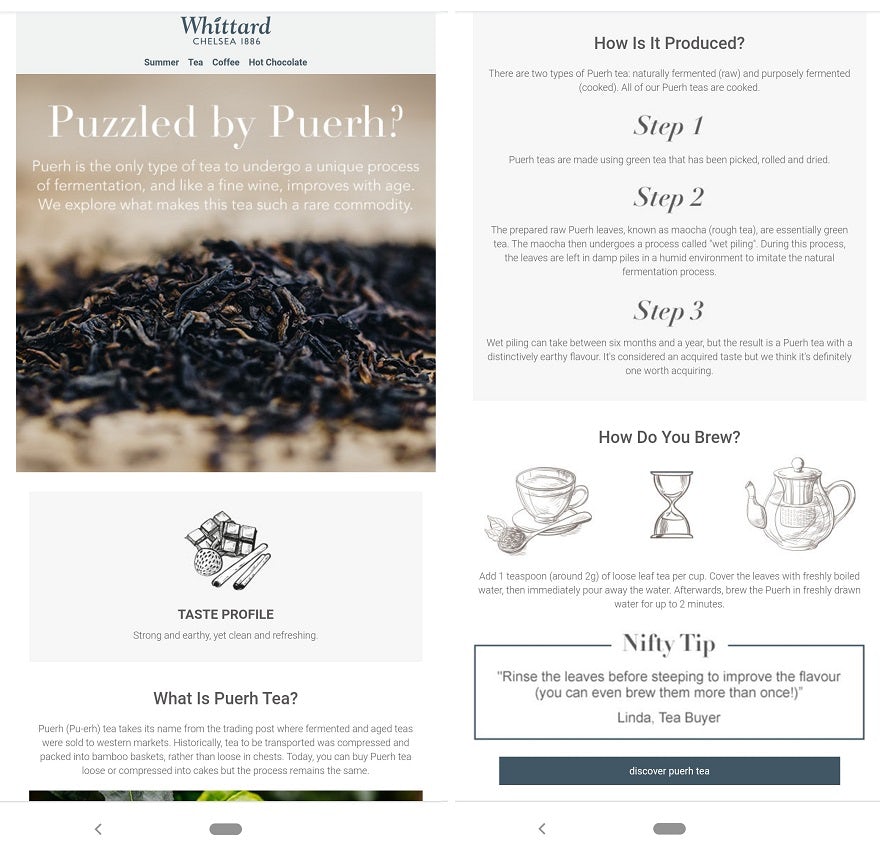 Whittard also makes good use of time urgency to entice customers to check out new products (such as “Going, going… these limited edition coffees are almost gone” and “Free coffee brew bags throughout September” – meaning that they need to make a purchase imminently if they want to try the new product) and also gears its promotions around the time of year.

As we’re approaching Christmas, Whittard has been drawing attention to the introduction of its tea and hot chocolate advent calendars and the arrival of its “showstopping” Christmas range, complete with “new festive flavours”. These emails have been timed to arrive in a period when shoppers are likely just beginning to turn their thoughts to Christmas shopping and worry about being able to come up with ideas for gifts – no doubt they’ll be glad to get one or two in the bag. 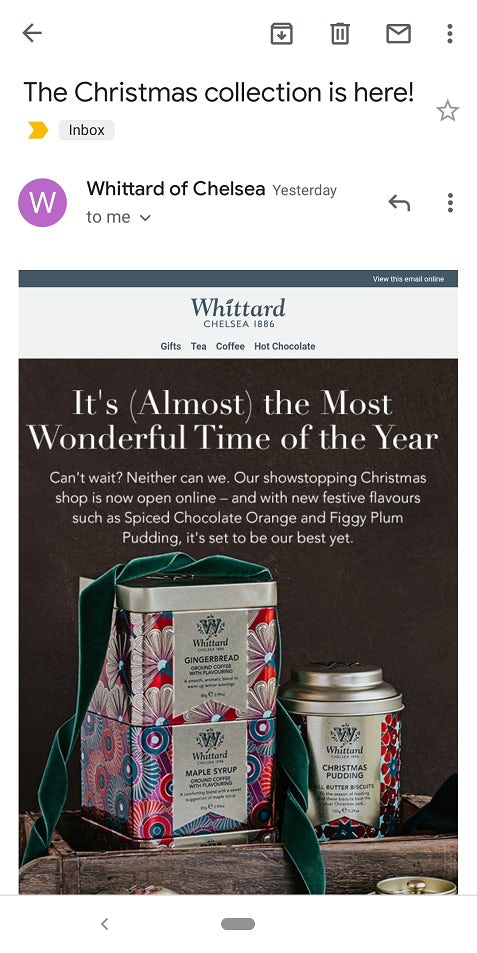 Whittard has timed the emails marketing its Christmas range to arrive just as shoppers are likely to begin brainstorming Christmas gifts – or wanting to get in the mood for the festive season. (Image: Whittard of Chelsea)

While I wouldn’t say that Whittard’s email marketing pushes any particular boundaries or breaks vastly new ground, the brand is good at playing to its strengths: it has a varied range of products that are likely to appeal to shoppers by being a little bit outside the norm, and it encourages consumers to engage with them, discover its range, and find new ways to enjoy its products.

Whittard is good at inviting opinions from its customer base and keeping them invested, which makes them feel like part of a community and increases the likelihood of a repeat purchase. The emails also make effective use of imagery and are well-designed, and display attractively on mobile as well as desktop.

While Whittard offers regular incentives like discounts, free gifts and free shipping in its email marketing, those aren’t what have kept me engaged with the brand (to the point where, a few months down the line, I decided to treat myself with two more loose leaf teas). Instead, the interactivity of the emails and the ‘value added’ that they provide with recipe ideas and information on new product types are what has kept me coming back to Whittard and opening its emails whenever I see them in my inbox. 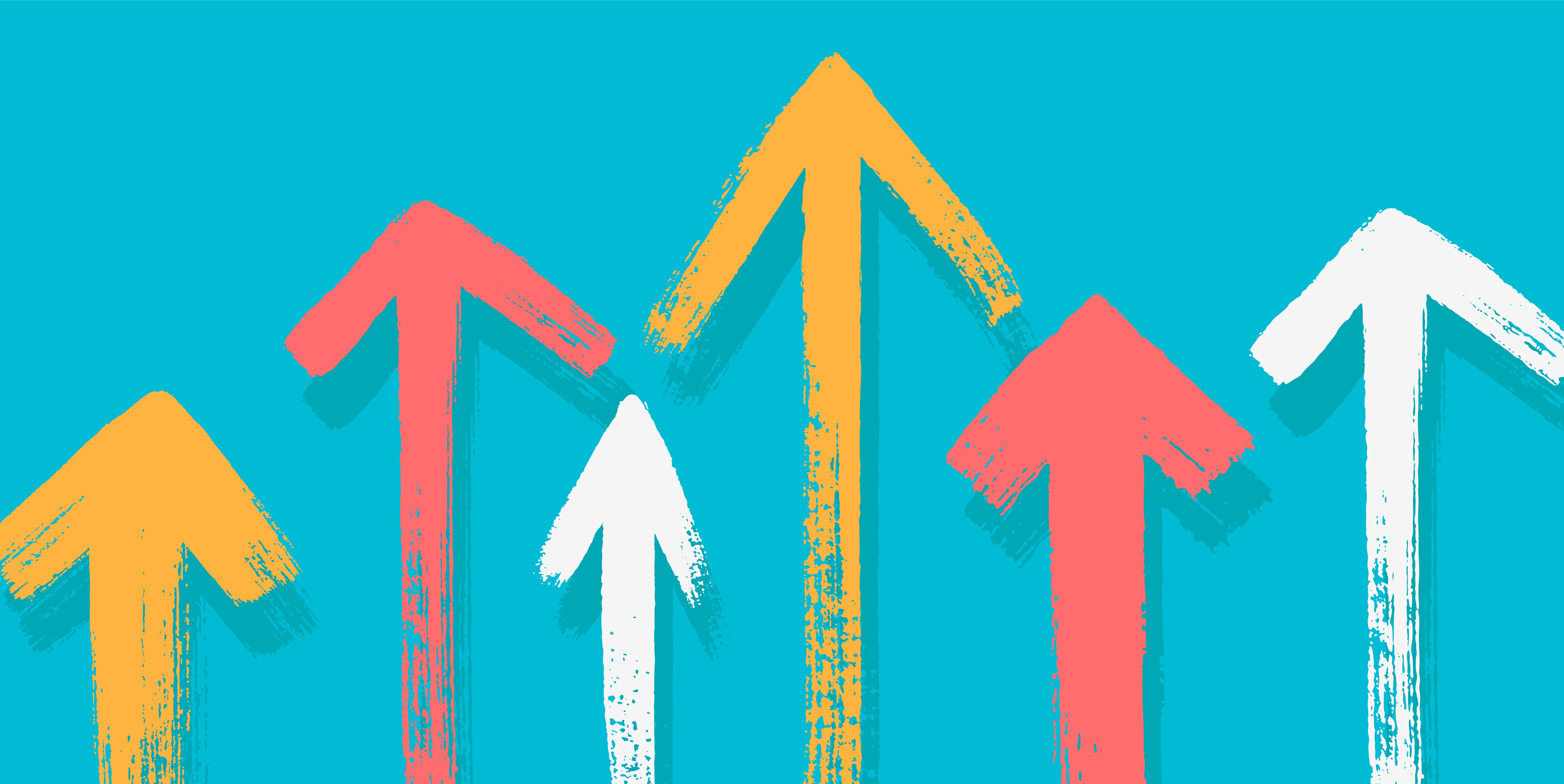 Online, upselling can be a powerful tactic for driving more revenue from a sale. Nikki Gilliland looks at 10 powerful examples of brands using upselling online, and why they are effective. 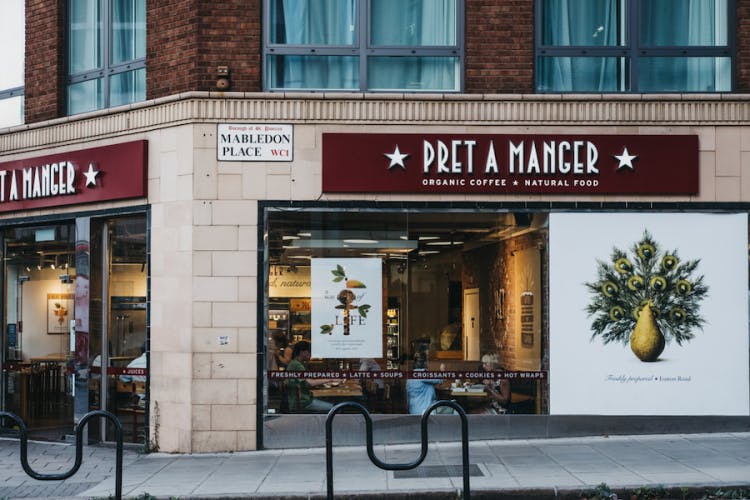 Pret a Manger announced the closure of 28 stores in July, leading to the loss of 2,890 jobs. The chain is hugely reliant on commuters and office workers, but with a large percentage of people still working from home, it is now struggling to regain sales.