A few weeks ago there was a huge buzz about my neighbor and social media hero, Amanda Palmer, raising over a million dollars from fans to promote her new album.

If you’re a relationship marketer, can you imagine a greater accomplishment than fans who will bankroll an enterprise they believe in?

Images of Amanda Palmer appear rather often in my conference presentations. I’ve used her to explain revolution, social media, digital business models, and well, just to slide an extra dose cool in to what I make. (It’s like waving a secret flag.)

The reason for this is simple; Amanda Palmer is cooler than I am. And most anyone else as well. And its the best kind of cool, expressive rather an reactive. Its brave, personal, and above all remarkable.

So, what’s she done? How about lead singer/co-instigator of the Dresden Dolls, ditto with Evelyn, Evelyn and a very nice solo career (listen to Who Killed Amanda Palmer). Her fans (guilty as charged, dear reader) care about her, as both artist and muse. She just concluded a campaign on Kickstarter to fund her next album that raised $1,192,173. That’s the most ever for a musical project.

As you can tell, she got money from a lot of people. Exactly 9,333 folks paid $25 and will be getting a deluxe edition of the CD. Two fans paid $10,000 for dinner and a portrait-sitting with her. (“Why no, that’s not what happened to the Wieneke’s kids college fund….But hey, honey, I’ve been thinking the living room could really use some new art right over the fireplace …”)

It’s her talent, thirst for delight, embrace of maker culture, public nudity, pained eyebrows and willingness to regularily throw care to the wind makes her a cause célèbre.

Fans adore her and she adores them right back. 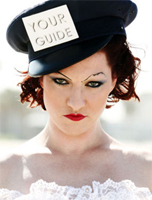 On stage at the Future of Digital Marketing in London I called her one of the most astute practitioners of social media anywhere. Nobody tells you at the career office at college to go be a mute statue in Harvard Square. Can you think of a better social media training ground than that kind of intimacy? Try tweeting with *no* characters. That’s life as a statue mime.

Here’s my video of Amanda Palmer explaining how she moved her music career online, and gave a big chunk of work and involvement to fans. Seriously, if you want to know about digital innovation, seek examples that are personal as well as corporate.

She puts just-written songs on YouTube and does so much tweeting with her 562,000 followers that it’s a wonder her fingers haven’t fallen off.  My mantra “What are  a half million twitter followers good for? Depends on what you *do* with them.” comes from watching her. Is there any telling what’s next?

As the NYTimes reported:

Just before midnight last Thursday in an industrial parking lot in Brooklyn, the singer Amanda Palmer stood before a few hundred of her fans in a dress made of balloons, urging anyone with pins or scissors to pop the garment away and reveal her nude body beneath it.

She does this kind of stuff all the time. She even risked her reputation by getting her picture taken with me.

DEMAND MORE – STOP SETTLING FOR LESS
So, given all that, isn’t it time that she think much bigger.

Dr. Evil: We get the warhead and we hold the world ransom for… ONE MILLION DOLLARS!

Number Two: Don’t you think we should ask for *more* than a million dollars?

Because Amanda is Amanda, bigger doesn’t doesn’t mean money. She should ask for a duchy or getting her face on the dollar bill or …  keep reading for a really cool end game.

Just like the value of Twitter follows is based on your plan for them, the same is true of a million dollars.

Honestly, this kind of monetization of fan engagement is awesome-ball cool and meaningful. But the million is just a small piece.  Amanda’s fans have given her venture capital based on their relationship. They want her to do more – play more – and have her give a damn about them more than any other competing funding structure would allow.

There’s already been more than a million dollars of press coverage of this accomplishment. It’s not the money, it’s who has it, and the freedom that provides. What if after paying off prizes, she gets a 6:1 return on her investment, which promoting her album could return. What if this also grows the fan base, and supporters feel she paid off their passion? The next idea could raise 20 million, try another 6:1 ratio.

At its best digital innovation enables new business models. This is another example of the changing power relationship between customers and brands, and its not limited to entertainment, or one performer.

The Kaiser Chiefs and their agency Wieden & Kennedy, London, are up for a Grand Prix Award in Cannes for their work that allows fans to mix their own version of the Kaiser Chiefs latest album and sell it at a commission. And Cee Lo Green has started selling fan experieces packaged up quite a bit like Ms. Palmer’s Kickstarter offering. The day when fans buy a mass product is vanishing just as surely as the days when they waited by the radio to hear their favorite song come up in rotation. And that change will spread through other industries where consumers can be enticed to pay more and influence product creation.

Forget Oprah and her affiliation with the drek of the O-Network. (let’s save the Story of O for another day. ) ;>  I want the Amanda Fn’ Palmer network – ABC, CBS, FOX and then AFP. Of the four, I think hers already has a stronger brand affinity, at least at my house.

What’s the value of a million dollars? Depends on what you do with it, and if the fans get to help.

Making LinkedIn generate more job interviews or leads for your business is all about how you think about what you already know works and getting prospects off of social media.

Contrary to what “the experts” say, knowing how to set up an engaging LinkedIn group or attractive profile is not the end game. Nor is finding crafty ways to mention your blogs, webinars or new product releases within LinkedIn Groups going to create sales.

The key to success is actually rooted in creative thinking about what you already know works and getting your target market off of social media. Here’s the proof.

While Facebook’s stock languishes, shares of the world’s most popular social network for professionals, LinkedIn, have been treated far more kindly. With a forward price-to-earnings ratio of approximately 75, investors are betting that LinkedIn’s future is bright.

But the company may be in for a rough patch as word broke today that some 6.5m passwords have been stolen from the social network.

Topics include the world app economy, the best time to post links on social media, the evolution of content marketing, and some shameless self-promotion.

If your eyes are straining to see the detail, you can click on some of the images for larger versions…