Coles and Bunnings took out the second and third spots on the Australian list, with $3.64 billion and $1.1 billion respectively, the first time either had made it into the top ten.

Harvey Norman and Myer were fourth and fifth with $642 million and $625 million.

Despite Harvey Norman’s impressive position in the top five, the brand actually experienced a 27% loss in value, which was indicative of results seen across the globe. American and British electronic retailers also experienced declines, with Best Buy losing 52% of its value, GameStop 29% and RadioShop 26%.

Rounding out the rest of the Australian top ten were Big W, Target, Kmart, David Jones and JB Hi Fi, with David Jones experiencing a loss of 9%.

Overseas, supermarket chain Aldi reigned supreme in Germany, Tesco came out number one in the UK, yoga apparel retailer Lululemon was top of the list in Canada and Walmart was named as the most valuable retail brand for the fifth consecutive year in the US.

According to the report, 2012 saw the gap between Australian consumers and local retailers widening, a huge problem for our homegrown bricks-and-mortar retailers.

Shopping online from foreign retailers is a well documented issue in Australia, and it seems domestic brands are still finding it tough.

But Interbrand’s Sydney-based general manager Andy Wright believes that a large part of the problem is due to the fact that local brands are too slow to respond and innovate.

The lack of creativity and differentiation in the Australian retail market has become apparent.

Australia’s reputation as a testing ground for new products hasn’t translated into retail experimentation. International retailers and digital entrepreneurs have identified this market is wide open for disruption.

As overseas counterparts spotted digital and international opportunities, Myer and David Jones finally launched online and mobile shopping offers. A painfully slow step in the right direction, although cynics would argue that if customers aren’t walking in off the street, why would they click through online?

This sentiment is backed by founder of Deloitte Digital, Peter Williams, who verbally slammed Australian retailers at the Melbourne reveal of the Interbrand report for lagging so far behind.

Just whilst our Australian retailers – who have been pretty abysmal in e-commerce – are starting to invest gazillions of dollars into this stuff guess what?

The internet or the web ain’t really that relevant anymore.

Because if you walk out on the street the world is re-platforming again on to smartphones.

For the year ahead, Wright hopes that we will see significant changes in Australian retail and perhaps a complete reinvention of the retail experience for consumers.

But which brands rise to the challenge, he says, remains to be seen. 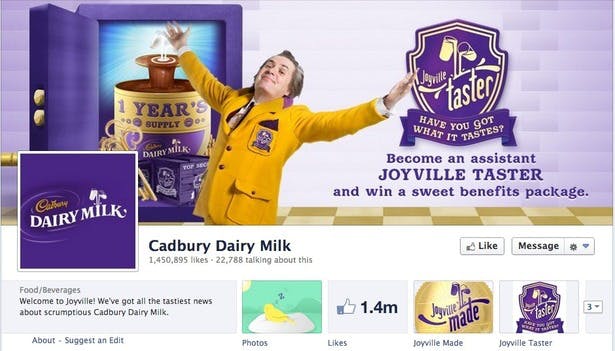 Cadbury appears to be readymade for social marketing as it is a historic brand with products that people love.

However it hasn’t simply rested on its laurels and expected the ‘likes’ to come rolling in.

In the past year we’ve reported on Cadbury’s use of Facebook and Google+ for product launches, as well as its shift away from traditional media thanks to its success in social media.

This post is the latest in a series that has already examined the social strategies of several other major consumer brands, including ASOS, Tesco, McDonald’s and Red Bull.

It’s an interesting question, and one which came up when I was moderating the Site Search and Naviagtion roundtable at Digital Cream last week.

Roger Willcocks of Screen Pages has been sharing some stats on 21 of his clients’ ecommerce sites, and finds that onsite search doesn’t play a huge role in navigation.

However, when it is used by visitors, it more than pays its way…