Not buying or licensing Google’s technology in 1998

In 1998, Google’s two young co-founders approached Yahoo when they were making the rounds for backing in Silicon Valley.

According to a book written by John Battelle, that opened the door to an investment, licensing deal or an outright acquisition of the duo’s technology. But Yahoo (and other major players) weren’t interested.

Turning to Google for search results in 2000

Two years later, at the height of the first .com boom, Yahoo saw that search was becoming far more important than it had anticipated and it looked to third parties for search technology while it worked on its own.

One of those third parties was upstart Google, which it struck a deal with to power search on yahoo.com. That deal, of course, was far more favorable to Google than any deal would have been in 1998.

Paying billions for Broadcast.com in 1999

While Yahoo’s 1999 acquisition of Broadcast.com for $5.7bn didn’t kill Yahoo, it is arguably one of the worst-timed acquisitions in tech M&A history, and one has to wonder how the ill-fated acquisition impacted Yahoo in subsequent years. According to reports, Yahoo had the opportunity to purchase Google for $5bn in 2002. Although that price was high for Yahoo in relation to its own value at the time, it would prove to be the last chance Yahoo would have to acquire Google.

It didn’t, and the rest is history.

Failing to take full advantage of its Overture acquisition

Google AdWords may be the king of pay-per-click advertising, but the model was pioneered by Overture, a company Yahoo acquired in 2003 for $1.4bn.

As part of a patent lawsuit settlement, Google obtained a perpetual license to a key Overture patent that would spell trouble for AdWords. The price: 2.2m shares of Google stock.

While there were questions about the legitimacy of Overture’s patent, and some suggested it would be found to be invalid, in retrospect, Google got a bargain of a settlement.

While that may not be entirely fair, one thing is hard to dispute about Semel’s reign at Yahoo: with his total compensation pegged at some $500m or more over his tenure, he has done far better than the company he ran.

While there’s no denying that Web 2.0 upstarts Flickr and Delicious wouldn’t have saved Yahoo, the company’s failure to manage the assets it purchased, particularly given its built-in audience, represented another huge missed opportunity that could have helped Yahoo find its way on the modern internet.

This excellent article from gizmodo looks more deeply into this. The restrictions on Flickr’s mobile development is a particular missed opportunity, opening the door for the likes of Instagram. As the story goes, Yahoo was nearly able to acquire the popular social network in 2006 for $1bn but due to a faltering stock price, Yahoo lowered its offer to $850m, allowing Facebook CEO Mark Zuckerberg to walk away from the deal.

Yahoo has made plenty of bad moves in acquiring (or not acquiring) other companies, but its crowning failure was its handling of its own potential sale.

In 2008, the Redmond software giant, eager to compete with Google, was willing to pay $44bn for Yahoo, but thanks to what many considered gross incompetence, Yahoo’s board rejected the offer.

Months after having failed to make it to the altar with Microsoft, the worst financial crisis in decades hit. Steve Ballmer, Microsoft’s CEO, must have breathed a sigh of relief and he capitalized on his luck by inking a partnership that gave him most of what he wanted without having to buy Yahoo. While this deal may have been a convenient way to turn back the hands of time for Yahoo, at least partially, it was a far better deal for Microsoft, and didn’t help Yahoo answer any of the fundamental questions crucial to its future.

Facebook employees and investors are set to cash in when the world’s largest social network goes public later this month, but life at a public company isn’t always easy.

Just ask the executives at Nokia and Yahoo. 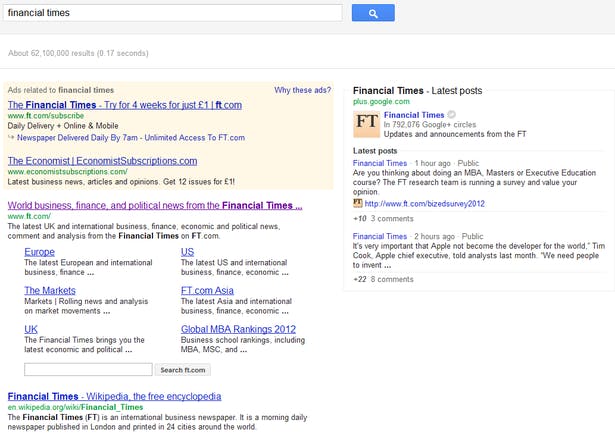 With the release of Google+ in September 2011, businesses have been looking to see how the platform can assist in their digital marketing efforts.

In particular, companies have been keen to see how Google+ can impact on search engine marketing.