Most of us will also remember, or at least recognise, the names behind much of that content – websites created for the sole purpose of grabbing clicks with their sensational headlines and attracting as many eyeballs as possible to their ads. Upworthy. 9GAG. LifeBuzz. Distractify. Viralnova.

Some of the publishers from the clickbait era are still alive and well: BuzzFeed was born out of the heyday of clickbait and Advice Animal memes and went on to develop into a thriving digital publishing empire – at least until some recent troubles. Bored Panda, which originated as a blog started by a Lithuanian photographer in 2009, is growing faster than ever.

For the most part, however, the names in my list above are little more than a vague memory and the subject of the occasional retrospective. Thanks to a combination of some deliberate algorithm changes on the part of Facebook, clickbait publishers’ biggest source of traffic, and increasing internet user backlash, the clickbait era fizzled out, taking the revenue streams of viral content farms with it.

But viral content on the internet never lost its appeal, and now, it seems like we may be in the throes of a second clickbait era. This time, the battleground is a different Facebook property: Instagram.

The Wall Street Journal recently published an in-depth look at a new wave of “content factories” on Instagram: viral accounts like @pups, @funniest, @tat and @funnymemes that churn out entertaining, cute, awe-inspiring or relatable posts with the aim of going viral and pulling in as many views and shares as humanly possible. Sound familiar?

The fact that the second era of clickbait is taking place on Instagram, not Facebook, says a great deal about changing social media habits – and the lucrative appeal of Instagram’s combination of advertising and influencer marketing. However, the new trend could have a detrimental effect on Instagram: if the site becomes as saturated with viral content as Facebook once did, users might be put off – and if Instagram is forced to take action to combat viral accounts, brands and influencers could be caught in the crossfire.

Views are the new clicks

The company that the Wall Street Journal’s Georgia Wells and Jeff Horwitz single out as being behind the vast majority of Instagram’s new wave of viral content is a content firm named 421 Media. Styling itself as “The world’s leading content network for the next generation”, 421 Media prominently boasts a huge, constantly-updated counter on its homepage reflecting total views across all of its content. Clearly, views are the new clicks on Instagram.

421 Media puts out a combination of original content and republished viral posts, with their original creators credited in the description. Not all of these are native to Instagram: plenty of them originated on other social networks like TikTok, Snapchat and Twitter before being republished on Instagram. But that hardly matters, as long as they’re good for the views.

The shift from counting clicks to counting views in the second age of clickbait content is an interesting game-changer: for viral content publishers, it means there’s no need to bother with website upkeep or maintaining separate web presences for their content, as everything is hosted on Instagram. There’s also no need to rely on tactics to lure users away from Instagram, although the videos on 421 Media pages like Funniest use similar “curiosity gap” techniques to entice users to hit Play, with captions like “If you’re having a bad day, watch this” and “How Amazon actually delivers your package.”

However, the lack of a separate web presence means that viral content publishers are even more at the mercy of Instagram if it decides to hand out penalties or remove content. 421 Media makes its money from sponsored posts, counting brands like Sony, Paramount and Amazon Studios among its advertisers. These are typically marked with a #sponsored or #partnership label – though the Wall Street Journal reports that this disclosure is sometimes missing from 421’s sponsored content.

Instagram has removed viral accounts for violations of its marketing policies, which disallow “marketing built on purchased accounts, borrowed content or undisclosed ads”. One of the accounts in question belonged to 421 Media and had 7 million followers; 421 reportedly believes that the removal “wasn’t warranted”.

Are you the left or right ? @wework has something for both! #partnership

A post on one of 421 Media’s viral accounts, @makeupgalss, sponsored by WeWork

So far action taken against viral content accounts on Instagram appears to be the exception rather than the rule, but the Facebook-owned social network is clearly aware of the fine line between permitting popular content that benefits the platform and opening the door to a lower quality of content on Instagram. Another rising trend highlighted by the Wall Street Journal is giveaways: influencers raffle off a high-value prize like a designer handbag (sometimes clubbing together in a group to obtain the item) in exchange for followers. One would-be influencer interviewed by the Journal, Amber Faust, grew her follower count from 100,000 to 250,000 by taking part in a giveaway. However, she found that her new followers had little interest in engaging with her posts and has since stopped taking part.

There are currently no rules on Instagram against giveaways, but it seems like an area in which the social network might need to intervene in future. Like viral content, Instagram giveaways play into a culture that is increasingly driven by followers and views and is far less concerned with genuine engagement. The ‘like count ban’ seems to have done little to dent this obsessive pursuit of metrics.

What this means for brands and influencers

In truth, the new ‘clickbait’ wave is simply the continuation of a long-standing trend on Instagram.

Instagram is the hottest social network of the moment, pulling in a young and trendy audience while still appealing to older internet users (unlike platforms such as Snapchat and TikTok whose hyper-youthful appeal tends to alienate older people). It is a mecca for brands, increasing numbers of whom are using it to build businesses from the ground up, and alongside YouTube, is one of the biggest drivers of influencer culture.

Bad actors have already found plenty of ways to take advantage of this with inflated follower counts and fake sponsored content, prompting crackdowns from Instagram. If Instagram perceives the new wave of viral content to be detrimental to its platform – which gained popularity as a place for authentic, personal content – then it will more than likely take action against that, too. And there is bound to be a knock-on effect on influencers and the brands that sponsor them.

In many ways, the clickbait era represented the heyday of publisher traffic and engagement on Facebook. Since then, Facebook has made numerous changes to its algorithms that make it more difficult for publishers to gain reach and exposure on Facebook organically. And while it can be argued that many of them were warranted in order to get rid of the pervasive, shallow content that flooded the site, it’s worth bearing in mind that a) Facebook also created the environment that allowed clickbait to thrive in the first place, and b) it isn’t always possible to confine the impact of these penalties only to those who wholly deserve them. Instagram’s content farms are benefiting from the same conditions that allow influencer marketing to thrive, but most people would not want to see the death of influencer marketing as a result.

So far, Instagram’s particular brand of viral content is nowhere near as pervasive as clickbait was on Facebook at its peak, but the conditions exist for it to become that way, as long as Instagram advertising and sponsored content remain as lucrative as they currently are.

And Facebook has been here before: the pervasive presence of clickbait had a knock-on effect on its own reputation as the two were inextricably linked, and Facebook users couldn’t browse the site without being confronted by endless amounts of it. It also threw the shortcomings of Facebook’s News Feed algorithm into stark relief – just as viral content farms are doing for Instagram’s follower-driven culture and lax approach to accounts that play fast and loose with sponsored content.

With usage of Facebook in steady decline, Facebook is placing its bets for the future on Instagram and WhatsApp, and is unlikely to want to see them jeopardised. It remains to be seen how far the company will let things go before it acts, and what the impact will be on businesses who make their living through Instagram – whether honestly or dishonestly. 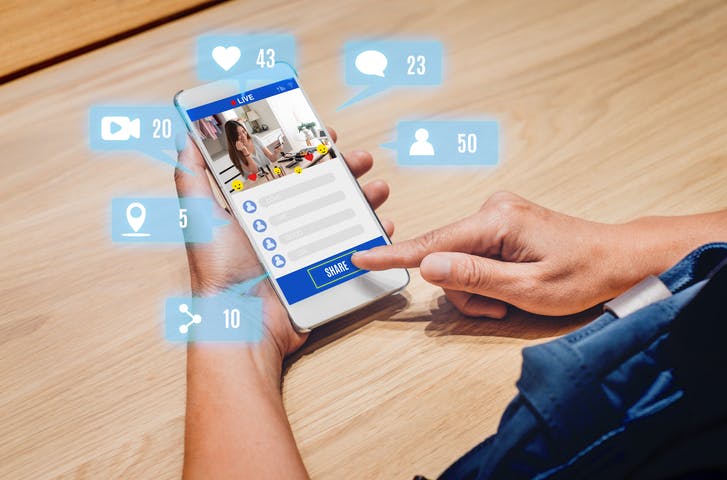