With more than A$38bn in revenue in its last financial year and 771 stores, Coles is a powerhouse of the Australian grocery sector with an estimated 24% market share. The website offers a wide range of product information and services including a very popular ‘click and collect’ feature.

But though it seem to be going all-in with ecommerce, it’s not clear what exactly a supermarket can accomplish on social media.

Success on social channels typically comes from identifying a niche audience and providing them with interesting information and offers to distract them away from interacting with friends and family. Is it possible to do that with a tin of beans?

Well, Coles is certainly trying and the activity six of its social networks offers guidance for all marketers on the potential for delivering value even if you are selling commodity products.

Starting with the website, we can see that Coles has a simple, clean design style, with a heavy emphasis on bright red.

Unlike some of the other Australian brands we’ve covered recently, Coles puts its social links at the top of the web page. This implies that it is keen for people to view its social sites and that it’s not afraid of losing people who click away.

The first social icon is for Facebook, which makes a lot of sense. Australia has 13m active Facebook users (57% of the population) and the average usage is a staggering 1.7 hours a day, according to a recent Nielsen report.

Clicking through to the Facebook branded page shows that it has 869,000 likes and that content is updated daily.

The content is high-quality and clearly designed to be engaging and shared. It offers tasty recipes, special offer, and even a celebrity appearance for a Dame Edna Everage branded ice cream cone! Nearly every post has triple-digit likes and shares which I would normally say indicates that the brand promotes its posts. The reason is that even for an audience size approaching 1m people it’s unusual to see such levels of engagement organically.

Organic distribution, as I pointed out here is reportedly dropping to single digit percentages on Facebook and for large brands that can mean that very few people will see its posts.

But updates about food are naturally likeable and shareable. People frequently associate themselves with gourmet food and delicious recipes by liking and sharing. And the number of shares do seem to be similar and correlated with the number of likes. which typically is not the case when you promote posts outside of your audience. (The ‘likers’ tend to far outweigh the ‘sharers’.) So while it’s possible that Coles is a heavy promoter, it’s not clear whether that is indeed the Facebook strategy.

Interestingly, Coles also uses Facebook Apps to both provide customer service and field applications for jobs. Both of these Apps just take you to another website for now, but it is interesting that it has tried to move these from the web to the Facebook page. I suspect we will see more brands doing this in future.

Next up is Twitter which seems to be an unusual place for a supermarket to spend its social media efforts. But the Twitter audience is impressive: 30,000 followers and 27,000 tweets.

Coles tweets frequently and uses engaging video and images as well as text. This is important as using a variety of media makes its tweets more likely to be seen in a busy Twitter stream. I did wonder – is Coles using social media listening tools to manage its Twitter audience? Having a look at the Tweet JSON reveals that, no, it uses the Twitter website and not some power-user tool.

Finally I think it’s noteworthy how many people Coles is following: more than 4,000 of its customers. This tells us that Coles is not just using Twitter to broadcast, but is also engaging with other Twitter users regularly by favoriting Tweets.

I did not see any retweets, though which is something it might want to try. Everyone likes to be retweeted, especially to an audience as big as Coles’.

Lessons from Twitter: Twitter is now a great place to deliver your brand message with a variety of media and engage with customers too.

Coles has a very popular YouTube channel with more than 370,000 subscribers and each video getting many thousands of views, some hundreds of thousands. And besides cooking tips, Coles really has made an effort to find interesting stuff including celebrity appearance, new and retro commercials, and even employee interviews for prospective employees.

Coles has organized its videos into a number of channels and seem to update monthly – though some their most popular videos are five years old.

It’s important on YouTube to have new content to keep your channel fresh as well as invest in ‘evergreen’ videos which will keep delivering your brand message over and over.

Not every type of video will get the same level of engagement, but having frequently updated content gets people to your channel and the popular videos will keep them there.

As with many other brands, Coles has let its Google+ page lapse. What was once an active and attractive channel for its content seems to have been left unattended. The last update was in March, 2015. It’s understandable though since even with 61,000 followers, it only had a handful of people liking and sharing content.

Lessons from Google+: Unless you’re one of the rare brands who has a following here, it’s okay to just let it go. (But maybe get rid of the icon on your web page?) But the most recent pin I could find was from eight months ago and a few of the pins now point to dead links so it feels like it’s been left unattended.

Again, this is understandable. If you’re not getting engagement on a channel then it’s wise to spend your limited resources elsewhere.

I am curious though, if simply having content on Pinterest is good enough. People can find your Pins through searching, so is there really a need update Pinterest frequently?

Here’s a post by a Pinterest search engineer on how to do Pinterest Search Engine Optimization (PSEO?). Interestingly, she doesn’t mention that pins have to be recent to be found via search (but does offer a few other helpful tips).

Regardless, I still think it’s unwise to leave old content lying around unloved, if only because bad links are bad for the brand.

Lessons from Pinterest: If you’re going to keep your boards without updating, at least test the links once in awhile.

Coles doesn’t link to its Instagram channel on the site, but it does have an active account with a few hundred posts and 13,000 followers already. It seems like Coles is just getting it going again, so I won’t comment much, but it does look like it is going in the right direction. Instagram Lessons: Instagram is the place to be, especially since you will be able to advertise on it very soon.

Overall it’s quite clear that Coles has a dedicated and talented team working to enhance its brand on social media and encourage online and in-store shopping.

Coles’ attention to customer service on Twitter is especially interesting, as is its commitment to short-form video which shares well across multiple platforms.

Gone are the days when a marketer could say that a boosted bottom line was the only end goal.

Today, brands are competing within crowded markets to win consumer affinity and awareness, and to do that in an era of heightened digital communication, it’s necessary to connect. 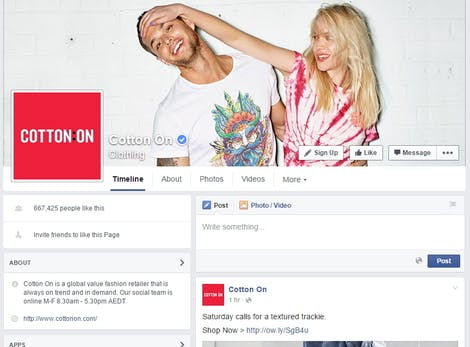 Cotton On is one of Australia’s best known fashion brands, and it is growing like crazy.

It also has ambitious targets for ecommerce, so to drive more online sales Cotton On has invested heavily in its social media presence.  So how does social help build the brand?